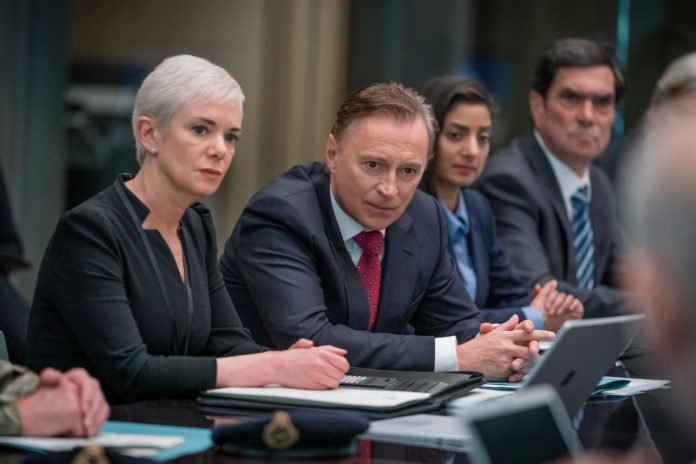 As the battle for power continues within Westminster and across the UK, Sky today reveals the first look trailer and images of its new action-packed, political drama, COBRA, written by Ben Richards.

The six-part Sky Original drama will launch on the 17 January on Sky One and NOW TV.

Set in the heart of government during a time of national crisis, the series stars Robert Carlyle as Prime Minister, Robert Sutherland, and Victoria Hamilton as his Chief of Staff, Anna Marshall. The first look images and high-octane trailer shows them fighting for control as they deal with an unfolding national emergency after catastrophic events literally throw the nation into darkness.

Under the name COBRA, a team comprised of Britain’s leading experts, crisis contingency planners and the most senior politicians must now assemble to help bring society back from the brink of collapse.

Joining the Prime Minister and his Chief of Staff are Fraser Walker, played by Richard Dormer, one of the best crisis contingency planners the country has ever known, and Home Secretary, Archie Glover-Morgan, played by David Haig – who will seize any opportunity for more power if such a chance presents itself.

Together they are all forced to contend with impossible political decisions, as well as their ferociously pressured family lives, as the fate and protection of the people of Great Britain is left in their hands.

Writer Ben Richards (Spooks, Strike: The Cuckoo’s Calling) said: ‘In a culture which predominantly holds politicians and public servants up for mockery and ridicule, I wanted to make a show that showed them as real, complex human beings dealing with life or death issues. We have been so lucky to have a cast that has been able to bring that aspiration to life.”

Is your car ready for its MOT?