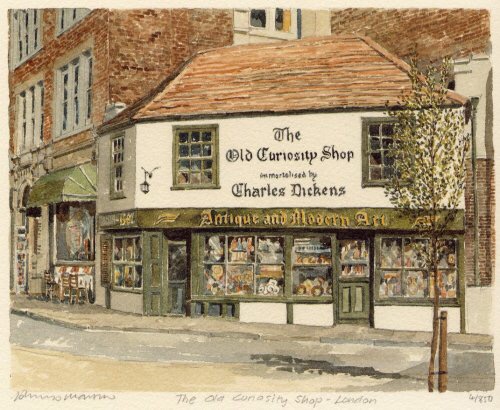 The Old Curiosity Shop sits next door to The Three Cripples Pub, while Fagin’s Den is hidden down a murky alley off a bustling Victorian street. With a wealth of back stories sourced from the novels, Dickensian delivers fast-paced storylines with surprising twists and turns.

The Dickensian set features a 90 metre cobbled high street with a fully functioning pub at one end and a 16 column colonnade, church and law courts at the other. Overall there are 27 two-storey buildings on the street and seven back alleys that lead to a parallel 30 metre street.

Stephen Rea, who plays the inquisitive Inspector Bucket from Bleak House, says: “Dickensian is the most beautiful re-working of the world of Dickens that you could ever imagine. The characters take on a fresh life, and any actor would be mad not to accept the challenge these great scripts offer.”

Pauline Collins OBE, who plays the delightful, ruddy-faced bundle of chaos Mrs Gamp from Martin Chuzzlewit adds: “We are taking characters that everyone knows and loves into a whole new world where anything is possible. You don’t need to know Dickens’ novels to fall in love with the stories we’re telling. It’s going to be a real treat to watch.”

Caroline Quentin, who plays Oliver Twists’ Mrs Bumble, says: “I’ve been a big fan of Tony’s work for some time and I fell in love with the idea of seeing all of these wonderful characters interact in a whole new Dickensian world. My character Mrs Bumble is quite a grumpy, bossy woman and a lot of fun to play!”

Tony Jordan, award winning writer and executive producer of Dickensian, says: “This is an ambitious and epic series for BBC One taking Charles Dickens’ characters and world into a whole new territory, in ways that I hope will delight and surprise viewers. We have an outstanding cast that will bring Dickens’ world to life in a way you have never seen before.”

Belinda Campbell, Executive Producer of Dickensian and Head of Drama, Red Planet Pictures, adds: “The scale and ambition of this series is incredibly impressive with storylines and characters that have real international appeal. We have constructed an entire 19th Century street for these famous characters to inhabit, transporting viewers back in time to Victorian London. The cast and storylines are out of this world and I can’t wait to see it all come to life in each half hour thrilling episode.”

Charlotte Moore, Controller BBC One says: “The fine cast assembled for BBC One’s Dickensian reflect the creative ambition of this 20 part series. Viewers will be invited into a world populated by many of literature’s most iconic characters and see their lives intertwine in a unique and surprising story told on an epic scale.”