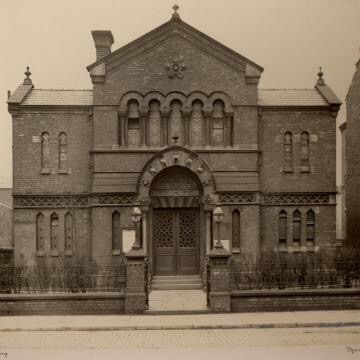 The project will result in a new museum extension that will house new galleries, learning and event spaces. The museum’s historic synagogue building will also be fully restored.

Development funding of £426,900 has also been awarded to help the museum progress their plans to apply for a full grant of £2.8million at a later date.

The museum plans to create a new visitor experience, exploring themes in its collection, such as immigration, integration and identity. New galleries will tell the story of Manchester’s Jewish community, including a dedicated gallery about the many Holocaust refugees and survivors that settled in Manchester. Volunteers will help catalogue and digitise the museum’s collection in a new archive room and new spaces will be developed with local Cheetham Hill communities to explore and celebrate Manchester’s diverse cultural heritage.

The museum is housed inside a former synagogue building, the oldest synagogue in Manchester. Built in 1874 by wealthy Jewish textile merchants, the museum now plans to fully restore the building’s architectural splendour to create a stunning new visitor experience.

Commenting on the award, Museum Chief Executive Max Dunbar, said: “We’re delighted that the Heritage Lottery Fund has given us this support. Over the past 30 years we’ve welcomed thousands of visitors, educating them about Jewish faith, heritage and culture. With today’s announcement, we can now build on this to create a new 21st-century Jewish Museum, showcasing more of our collections, educating more people and working with more communities to ensure Manchester’s Jewish heritage is preserved for generations to come.”
Explaining the importance of the HLF support, Head of HLF North West Sara Hilton said: “With a collection of national significance and set in a city celebrated for its cultural diversity, the Manchester Jewish Museum is uniquely placed to bring to life the story of one of our country’s oldest communities for people from a huge range of backgrounds. Thanks to money raised by National Lottery players we’re delighted to offer our support to the next exciting chapter in the story of the Manchester Jewish Museum and we look forward to seeing the plans develop.”