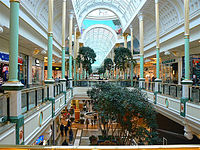 A fifteen year old boy suffered serious injuries and remains in a critical condition in hospital after falling from a bridge in the Trafford Centre yesterday evening.

Initial enquiries suggested he may have been involved in an altercation with a group of youths. However, police now say that the fall was an accident.

The teenager fell from the bridge which runs from the Debenhams’ end of the centre as a covered walkway to the carpark.

Detective Sergeant Stephen Warriner, from GMP’s Trafford borough, said: “We have trawled through all the CCTV that showed this tragic incident take place and after speaking to a group of boys who were there at the time, as well as other witnesses, we no longer believe anything untoward happened.

“Sadly this seems to be a heart-breaking accident where someone’s son is now fighting for their life in hospital.

“I want to thank the public for their help during this investigation and we will continue to focus our efforts on the family, providing them with support through this ordeal.”