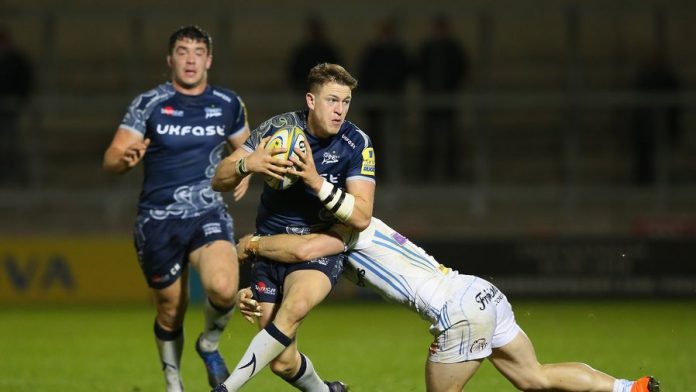 Sale Sharks director of rugby Steve Diamond was left to reflect on the Premiership’s fine margins after Friday’s narrow 10-6 loss to Exeter Chiefs.

The reigning champions sneaked a hard-fought encounter at the AJ Bell Stadium thanks to the game’s sole try from Lachie Turner early in the second half.

The Sharks pushed the Chiefs all the way, especially in a tense final five minutes when they twice almost went over the line through Denny Solomona and Faf De Klerk.

Sale were still camped on the visitor’s line with the clock almost up when referee Craig Maxwell-Keys controversially adjudged that the Sharks were off their feet at a ruck as the hosts sought to secure a decisive score.

“After the first 20 minutes it was always going to be won by one score and just after half-time they managed to get their noses in front,” said the Sale boss.

“We were OK in our d and in other certain areas but against a side like that it is always going to be won off a speculative kick or a bit of imagination and we just couldn’t muster that tonight.

“We played against a good side who are a good side when defending too. They have 14 men on their feet and its difficult to play any structure against a side that defends like they do.

“I don’t think we could have done anything more with the quality that we have got.

“I think we were unlucky in the last five minutes. I thought we got a bit of ascendancy and we just didn’t get the rub of the green with the last decision.”

Sharks’ charge up the Premiership table checked by Saracens