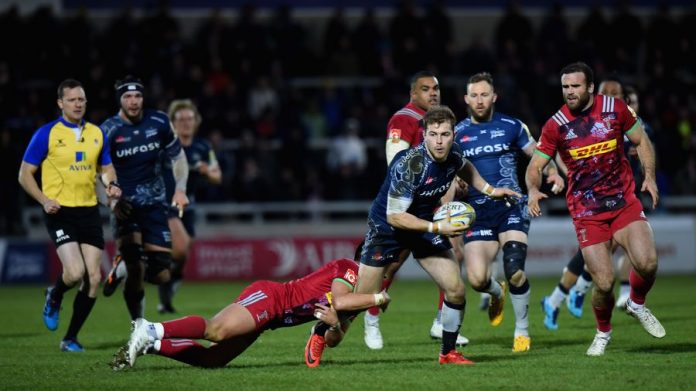 Sale Sharks director of rugby Steve Diamond believes last Saturday’s thrilling 30-29 Premiership win over Harlequins served as another sign-post as to the direction the club is heading in.

Having found themselves 29-20 with only 15 minutes left on the clock, the Sharks demonstrated they possess grit and guile to complement their famed attacking prowess by staging a dramatic fightback.

That book-ended a thrilling start to the game which saw Sale score two tries in a stunning first 15 minutes with Byron McGuigan bagging his eighth try of the season before Janse van Rensburg rounded off another potent Sharks move.

“Anybody who knows anything about what we are trying to do can see the side we are putting together,” said Dimes.

“Not only have we got this bunch of kids coming through who we’ll play but with James O’Connor, with Faf and with Rohan to name but a few we’ve got a fantastic back-line and if we stay direct and stay square then we can score tries and we have shown that over the past eight or nine weeks.

“Byron was performing in front of the Scotland head coach Gregor Townsend, who was at the AJ Bell Stadium, and he did really well as did Will Addison, so we have got some great backs.

“Obviously we were delighted to get the win and though it was a big blow to see AJ MacGinty come off injured, we have a happy changing room so it’s all good.”

Reflecting back on Saturday’s hard-fought victory, Dimes said he felt the key to victory was in resisting a solid period of Quins pressure early in the second half when the visitors also enjoyed the advantage of a stiff breeze behind their backs.

Young Sharks off to South Africa