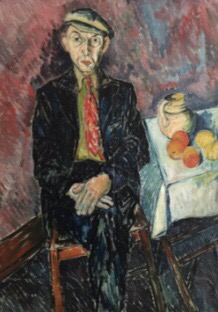 A major new exhibition which celebrates local Jewish life, art and enterprise during the Second World War is being held in Macclesfield.

The free exhibition entitled Macclesfield Hebrew Congregation – The Forgotten Synagogue is being staged by Incubation Arts at Charles Roe House from March 20.

It commemorates the 75th Anniversary of the opening of the Macclesfield Synagogue at 62 Chestergate (now Charles Roe House) in March 1941.

Among the items on display will be 38 paintings and sketches by the late Jules Weinberg, a young Jewish evacuee from London and rare items on loan from Macclesfield Silk Museum relating to the Jewish firm Oberland Silks.
There will also be panels and personal memorabilia depicting the lives of some of the 200 Jewish people living in Macclesfield, most of whom were evacuees but who also included those who had fled Nazi persecution across Europe.

Some of the displays will later go on show at Macclesfield Library, from June 13-25, during the Barnaby festival.

Councillor Paul Bates, Cheshire East Council Cabinet member for communities, said: “We are very pleased as a Council to help support this fascinating and timely exhibition that celebrates the rich artistic and cultural heritage of Macclesfield and its local Jewish community.

“I would encourage people to go along and enjoy this excellent free exhibition.”

There were 10 Jewish-owned manufacturing businesses, employing around 1,500 people, in Macclesfield and Bollington during the war.

The exhibition is being supported and assisted by Cheshire East Council, Macclesfield Silk Museums and Cheshire Archives and Local Studies. It is being funded by two anonymous donors.

The free-admission exhibition runs from March 20 to May 2 and is open Wednesdays to Sundays, from 11am to 4pm.

A 40-page book based on the exhibition, written by local and Jewish historian Basil Jeuda, will be on sale priced £3 (£4.70 p&p), from Incubation Arts, 62 Chestergate, Macclesfield SK11 6DY.