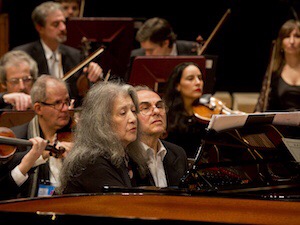 Manchester Camerata and legendary pianist, Martha Argerich, will be reunited for the first time since their remarkable performance at MIF 2013, for a tour of Italy this April.

The tour includes concerts in Bologna, Brescia, Padova with a short trip over the border to Ljubljana in Slovakia. Music Director, Gábor Takács-Nagy, has called Martha Argerich ‘both a poet and a tiger on stage’ and her performance with Camerata in Manchester drew accolades from many critics, include Hilary Finch from The Times, who described it as ‘one of the best performances of Beethoven’s Piano Concerto No.1 that I’ve heard in my life’. The Concerto is reprised during this 2016 tour alongside Mozart’s first and last symphonies, the latter, named ‘Jupiter’ being one of his most loved by audiences around the world.

Manchester Camerata’s Music Director, Gábor Takács-Nagy said ‘Martha Argerich has astounded audiences throughout her career with both the virtuosity and profundity of her performances of Beethoven’s music – it will be thrilling to perform one of Beethoven’s great works for piano and orchestra with her again.’

For the final date of the tour in Madrid Camerata will be joined by the young Spanish pianist, Javier Perianes. Described by The Telegraph as ‘a pianist of impeccable and refined tastes, blessed with a warmth of touch’, Perianes will be performing Beethoven’s mighty ‘Emperor’ Concerto, under the baton of Gábor Takács-Nagy. The programme also includes Mozart’s youthful Symphony no.1 and Beethoven’s Symphony no.4

A quarter of cancer patients experience avoidable delay to diagnosis