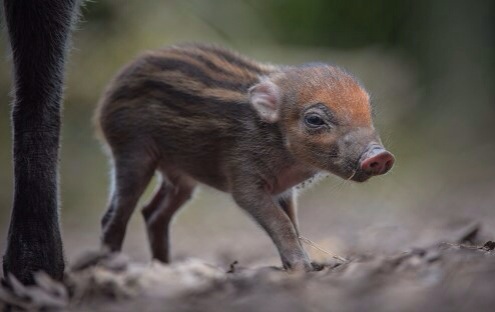 Chester Zoo is celebrating some new arrivals this May with the birth of a Visayan Warty Pig.

The sex of the zoo’s latest youngster, which was born to mum Viv (8) and dad Sid (7), is still unknown. It currently sports yellow and brown stripes which act as camouflage but these will eventually disappear at around 9-12 months.

Only 200 Visayan warty pigs are thought to be left in their native habitat in the Philippines, making them the rarest of all wild pigs and their decline, almost to the point of extinction, is blamed on habitat loss and hunting.

“Visayan warty pigs are critically endangered and face an extremely high risk of becoming extinct in the wild.They’ve suffered a drastic population crash in recent times with widespread commercial logging, illegal logging and agricultural expansion devastating vast amounts of their natural habitat. They’re also being over-hunted and their meat can often command at least double the price of domestic pork in local markets and some restaurants” adding:

“It really is a battle against time to save them.”

The Zoo was the first in the UK to welcome Visayan warty pigs, a species that gets its name from three pairs of fleshy warts on the boar’s face. The warts protect them from rival pigs’ tusks during a fight.

Next spring the zoo’s new Islands development, a £30m expansion which aims to showcase its conservation work in South East Asia, will open. Islands will feature mini-replicas of several islands including the Philippines and aims to further champion the plight of species such as the Visayan warty pig.

Chester Zoo has been named the UK’s most popular paid-for attraction outside London –...