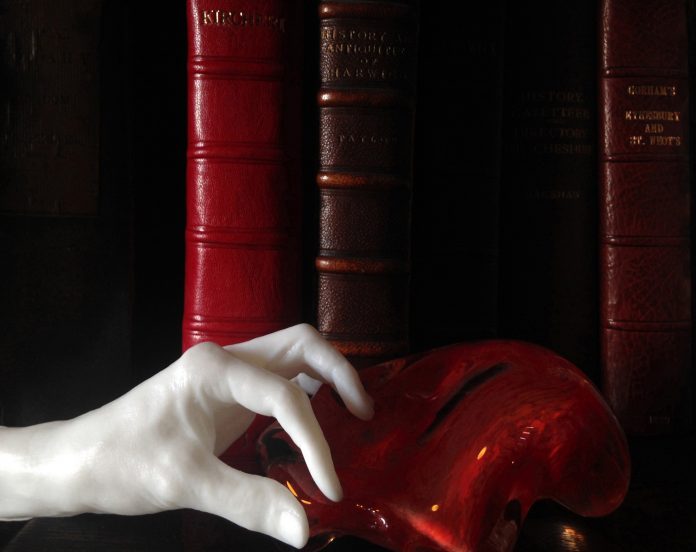 A Manchester Metropolitan University lecturer’s arts collective has produced an installation for the interior of Britain’s oldest surviving public library based on the notes and scribbled drawings of Elizabethan alchemist John Dee.

Chetham’s Library in central Manchester has commissioned the new installation, which incorporates digital 3D scanning and printing, alongside traditional scientific and hot blown glass, by the collective Brass Art.

Chara Lewis from Brass Art, and Senior Lecturer in Fine Art at Manchester School of Art, said: “Notes and drawings by 16th century alchemist John Dee, including sketches of apparatus for his experiments, and drawings of gesturing hands, were the starting point for the new pieces of work created for this installation and lead the audience on a very personal itinerary through the Library collection.

“Chetham’s Library staff have revealed the fascinating books and illustrations in the collection, and shared their expertise on gestures and symbolism.”

Illustrations in the collection imagining the elemental forces that shaped the world have also provided the artists with a rich source of material for their sculptural and video works.

Chara Lewis added: “The mysterious transformation of materials which fascinated Elizabethan alchemists has also inspired our work and we hope that people who see the installation will be drawn into the history and atmosphere of the library.

Sue McLoughlin, Heritage Manager at Chetham’s Library, said: “Brass Art immediately understood the magic and atmosphere of the library space, and they have responded by producing work with a mysterious, multi-layered quality.

“The artworks will be positioned around the library in unexpected locations and seldom-seen spaces, enticing people to explore and discover different parts of the building, which dates back to the 1400s.”

Chetham’s Library was founded in 1653 and is the oldest public library in the English-speaking world. Its collections range from illuminated manuscripts made for royalty through to documents which record the minutiae of everyday life such as letters, diaries and account books.

GESTURED will be on show at Chetham’s Library from 13 October to 8 December 2017. Admission is free.

Breakfast in the sky at Cloud 23