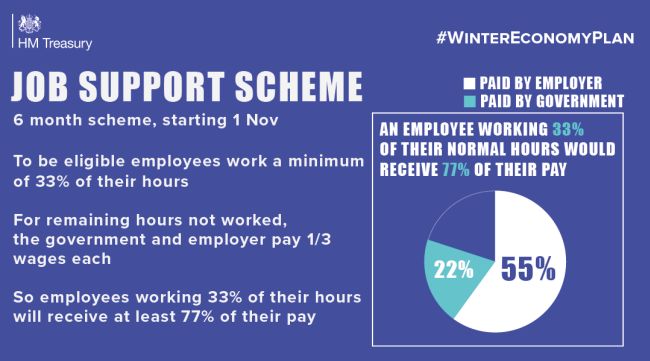 The Government will top up the salaries of people working on reduced hours by as much as two-thirds, Rishi Sunak has confirmed today, as part of the next “evolution” in the financial support.

The Jobs Support Scheme (JSS) will replace the furlough scheme, which will be wound down next month.

Under the new scheme staff will be paid by their employer for working at least a third of their usual hours, with the Government topping up the remaining two-thirds of their salary.

Companies with a bounce back loan will be able to “pay as you grow”, giving them the right to pause repayments for up to six months.

The Chancellor also extended the self-employment income support scheme and 15% VAT cut for the hospitality and tourism sectors, and help for businesses in repaying government-backed loans.

“ We need reassurance that the workers who will inevitably be out of work will be able to claim benefits easily and quickly, that they can apply for retraining schemes, grants and initiatives where possible, and that their mental health will be supported throughout this time.”

He added that “While these new financial aid measures are helpful, they do not go far enough to keep many businesses viable, and I predict a tidal wave of redundancies across the UK night time economy as we enter the end of the year.“

“My first reaction: good as far as it goes but what about industries that simply can’t return to even partial working any time soon – like aviation, live events, live music?“