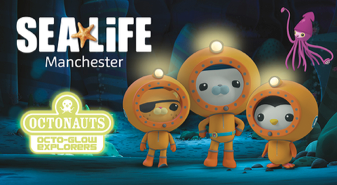 On the 22nd July – 3rd September 2017, SEA LIFE Manchester will be joining forces yet again with Captain Barnacles Bear and the Octonauts crew for another unforgettable underwater adventure!

These quirky and courageous defenders of the ocean are always ready to dive into action! Their mission: to explore new underwater worlds, rescue amazing sea creatures and protect the ocean.

This summer, CBeebies’ most intrepid ocean explorers will be inviting younger children and their families to become honorary recruits of the Octonauts crew and join their special mission to uncover the secret world of glow in the dark sea creatures.

Young adventurers will also have the opportunity to meet the real life Captain Barnacles and Lieutenant Kwazii, as they become Octo-Glow Explorers in Shellington’s Octo-Glow Lab.

Take part in a range of inter-active activities to discover how creatures of the deep use light to hide from predators, attract their prey and even talk to each other. Mini ocean explorers will also get to make their very own

Post-mission, all honorary Octonauts are encouraged to find out about other quirky critters of the seas and SEA LIFE’s many conservation programmes by visiting the centre’s host of non-glow in the dark creatures, including seahorses, turtles and many more.

Visitors will also have the chance to continue their voyage of discovery at Jurassic Ranger; the new for 2017 exhibit at SEA LIFE Manchester. Learn how the prehistoric beasts of the ocean have lived on in their descendants, and interact with some of the most powerful predators that once roamed our seas.

SEA LIFE Manchester’s newest additions have evolved from some of the most powerful predators of the past; Jurassic Ranger includes Axolotl, Lungfish, Lizards plus snakes, snails & fossils which visitors will be able to touch during ranger experience sessions! And what’s more, Jurassic Ranger features an interactive dino-digital game, with state-of-the-art technology screens and infrared lighting, allowing guest to meet the mighty Megalodon, one of the largest and most ferocious creatures of the prehistoric seas, and feed a deadly Plesiosaurus.

Find out more www.visitsealife.com/manchester. Reduced prices are available online, with prices starting from just £10.95 when purchased in advance online. For regular news, updates and competitions, SEA LIFE Manchester is also on Facebook/SEALIFEManchester and Twitter @sealifemanc

Play,Build and Dream at the Great Northern Warehouse