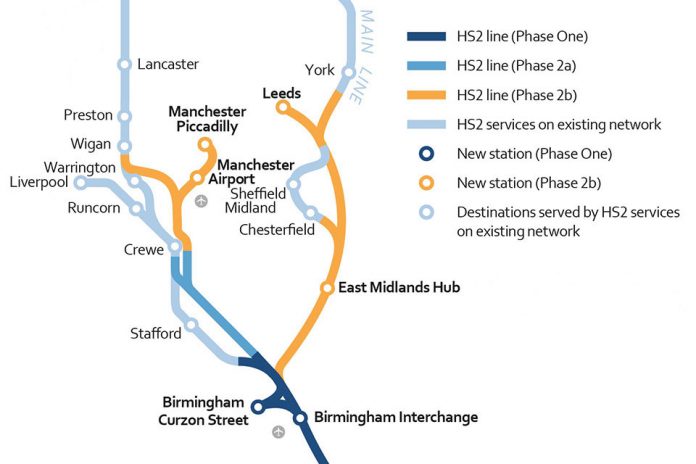 The Government is promising journeys from Brirmingham to Manchester could take only forty minutes and a more than doubling of rush hours seats from Manchester Piccadilly towards Stoke and Crewe and it reveals plans for the High Speed Rail line between the Midlands and the North today.

The final route for HS2’s second phase, which encompasses the Y-shaped network towards Manchester and Leeds, has been confirmed today by the government.

Plans to speed up the arrival of the line in the North West could include a new station at Crewe and Stoke on Trent being serviced as early as 2027 before the lines to Manchester could be completed in 2033.

The new route into Manchester has been changed on the approach to Manchester Piccadilly station to avoid direct residential impacts and a primary school from that proposed last year.

The new approach means that the West Gorton estate around Rostrum Avenue and the Armitage Primary School will no longer be affected by the route which will now have a straighter approach into Piccadilly.

David Higgins, HS2’s chairman, said: “Today we have taken a huge step forward in connecting 8 of our largest cities, freeing up space on our railways and building a catalyst for growth across the country. Once completed 30 million people will be served by HS2 across over 25 stations, helping to change the economic geography of the country, and bring prosperity to the midlands, the north, and beyond.”

Nigel Foster, Strategy Director for Transport for the North, said:

“Today’s announcement is another step forward in ensuring the North will have the rail connectivity and capacity it needs – not just between the North and the South but across and within the North of England.

“Together, Northern Powerhouse Rail and HS2 Phase 2b will help mobilise the economy of the North by enabling people to move with much more ease between our great economic centres. The investment will also give confidence to the business community and those who want to live and work in the North by improving labour markets and creating more job opportunities.

Members of organised crime group who jailed almost 100 years for possessing and transferring...