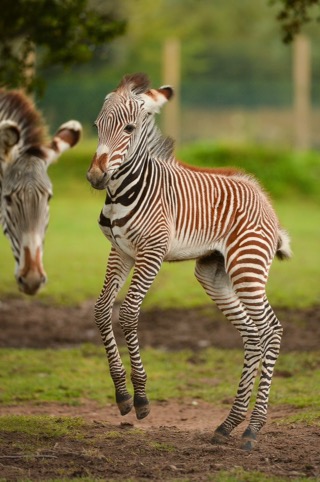 A rare baby zebra caught zoo visitors by surprise yesterdayat Chester Zoo after it was born right in front of them!

This is the second zebra foal to be born in the space of six days at the zoo.

After her 14-month-long gestation, zookeepers spotted that Nadine was showing signs of labour early on Sunday afternoon.
They carefully monitored the momentous event from a distance and Nadine gave birth after 40 minutes, in front of astounded onlookers.

Video footage, taken by a visitor, shows Nadine rolling around on her side before getting to her feet and starting to deliver the youngster.

“Nadine gave birth in the middle of the afternoon in front of a group of some pretty amazed visitors.

“At first Nadine was seen lying on her side trying to make herself more comfortable as she began to feel what was about to happen. She then got to her feet and picked her spot in the paddock and a healthy youngster appeared less than an hour later. It was a really smooth delivery.

“The foal is looking great and, with it being the second to be born here in the space of just a week, we’re sure the two new arrivals will be as thick as thieves.”

The Grevy’s zebra is listed as an endangered species by the International Union for the Conservation of Nature (IUCN) – their numbers having dropped by more than 85% over the last 30 years. Conservationists estimate that as few as 1,900 Grevy’s zebra could now be left in the wild and attribute their decline to a range of factors including a reduction of water sources, habitat loss, hunting and disease. They are the largest of the world’s three zebra species and are now found only in isolated populations in Ethiopia and Northern Kenya.
At the zoo, Nadine’s new arrival increases the number of Grevy’s zebra in the herd to six.

Keepers are yet to choose a name for the new arrival as they have not yet been able to determine the sex of new arrival.