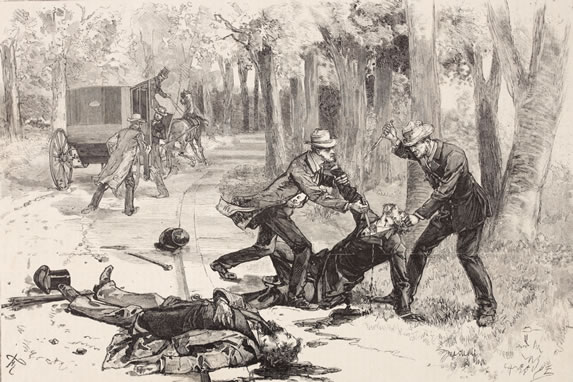 A collection of Police Gazette records relating to Ireland from 1863-1893 has been made available online by Ancestry, the leader in family history and consumer genomics. The records give fascinating insight into the types of crimes committed, wanted criminals, reward systems and missing persons in Ireland in the Victorian era.

The Ireland, Police Gazettes, 1861-1893 records are extracted from ‘Hue and Cry’, the official publication of the Royal Irish Constabulary (RIC) which operated in Ireland from 1814-1922.  ‘Hue and Cry’ was a means to communicate secretly between members of the police divisions and contained information on wanted criminals, types of crimes committed, rewards offered, criminals who had been apprehended, missing persons and army deserters.

Analysis of the collection reveals that assault was the most common crime over the 32 year period with 28,353 cases reported. This was closely followed by reports of breaking of License conditions (28,092 cases) and of theft (23,345 incidences). The records show the rewards offered for many crimes – which varied significantly from £1 for capturing a missing convict to £10,000 for information leading to the capture of a murderer.

Theft of livestock was rife at the end of the 19th century, and other crimes range from more petty cases of stealing bottles of ginger beer and stone throwing through to murders – some of which went down in history.

Accounts of several interesting cases appear in the records, including: The Phoenix Park Murders 1882

On 6 May 1882 in the Phoenix Park in Dublin Lord Frederick Cavendish and Thomas Henry Burke were fatally stabbed. Cavendish was the newly appointed Chief Secretary for Ireland, and Burke was the Permanent Undersecretary, the most senior Irish civil servant. The assassination was carried out by members of the “Irish National Invincibles”. Four men are wanted for the murder and they are described in the records as having “whiskers and moustache recently clipped to give a bristling appearance…natural hollow or dinge on bridge of nose…brown faded coat as if much exposed to sun…the men had the appearance of sailors or well-to-do artisans”.

Almost the entire Joyce family were tragically massacred in their small cabin in the Mayo mountains. John Joyce, his wife Bridget, son Michael and daughter Peggy as well as the mother-in-law Margaret were all killed with only their twelve year-old son Patsy alive when their neighbours found them. The Times (England) commented: ‘No ingenuity can exaggerate the brutal ferocity of a crime which spared neither the grey hairs of an aged woman nor the innocent child of 12 years who slept beside her. It is an outburst of unredeemed and inexplicable savagery before which one stands appalled, and oppressed with a painful sense of the failure of our vaunted civilisation.’ Ten men were convicted and three were hanged for this crime.

Ferret Stealing 1877 when William O’Brien alias Black, alias Sheridan was charged with stealing two ferrets in Achrony in 1877. He was a member of the South Mayo Militia. The records show that “one ferret is described as a white buck, the other a dark-coloured doe. O’Brien was last seen near Castlebar”.

Embezzlement 1885 Robert Farquharson was the assistant manager of the Dublin branch of Munster Bank. “He absconded from his office leaving his accounts in an unsatisfactory state” and was described as having “good dark sparkling eyes, prominent teeth, walks with a stoop, dressed in gentlemanly style, generally wears a silk hat”. Farquharson was last spotted on the platform of the railway station on Amiens Street. He had embezzled over £70,000 and then vanished without a trace.

“The Police Gazette records give us great insight into Irish society in the late 19th century. At this time there was significant unrest due to the Land War which saw many political figures, landlords, agents and tenants murdered.

“It’s fascinating to see the variety of crimes and note how some of them differ from those committed today. Stealing livestock was rife and the level of assaults and murders was much higher than the present day.  It all makes for fascinating reading for anybody looking to find out more about either a historic offender or a victim of crime in their family tree.”

To search the Irish Police Gazettes 1861-1893 log onto www.ancestry.ie