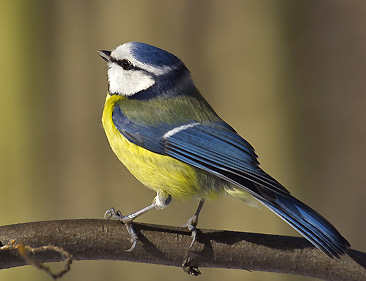 The House Sparrow, the blue tit, the Blackbird and the starling dominate our gardens in Greater Manchester according to the Royal Society for the Protection of Birds’ survey carried out earlier this year.

Over half a million people took part across the country and eleven thousand in Manchester, spotting over seven million birds.

In Greater Manchester, there were changes in the top ten as blue tits moved up from fourth to second, while the previous occupier of the second spot, blackbirds, dropped to number three. Starlings also fell from third place to fourth, with an average of just under two recorded per garden, as house sparrows remained at the top of the table.

Goldfinches climbed again to take seventh position this year and scientists believe that the increase in people providing food, like nyjer seed and sunflower hearts in gardens, may have contributed to their steady rise.

Scientists also believe that the weather has played a role in the ups and downs in this year’s top ten as many of the birds were recorded in lower numbers in gardens due to the mild conditions. Some species, such as blue tits, were likely to be more reliant on food provided in gardens than others, such as blackbirds, which could easily find their favoured foods like worms and insects in the countryside.

Overall numbers of species such as blackbirds and fieldfares may appear to have dropped in our gardens since last year, but in many cases this is not because these populations are in decline but because these species don’t need to come into our gardens during mild winters due to there being plenty of natural food available in the wider countryside.

However the continuing declines of some species are of greater concern. Numbers of starlings and song thrushes have dropped by 13 and 90 per cent respectively in Greater Manchester. Both species are on the UK ‘red list’ meaning they are of the highest conservation concern.
There is slightly better news for the house sparrow, as the declines appear to have slowed, and it remains the most commonly seen bird in our gardens. In Greater Manchester, the house sparrow held onto first position, with an average of three recorded per garden – a 2.2 per cent increase on last year. However, the bird remains on the red list as we have still lost 62 per cent nationally since 1979.

Lock Down Day Five – And a risk assessment of how to get essential...