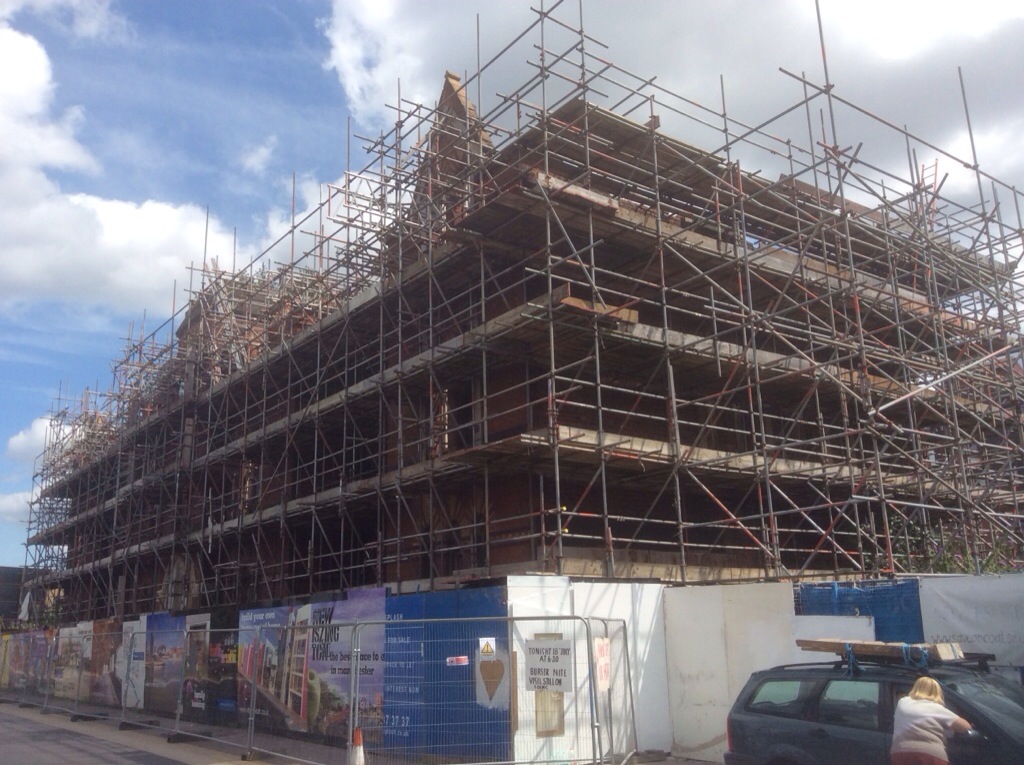 With the news that the Members of the Ancoats Dispensary Trust have received three quarters of a million pounds from the Heritage Lottery Fund, About Manchester takes a look at the battle to save it.

I’m fighting to save it because of what they have done to the area,Jackie tells me. “I lost my home at the bottom of Butler Street after living there for forty two years…..They are taking away everything that means something to people round here”

For over two years now, Jackie Marston and a dedicated small team have kept a vigil outside what is left of Ancoats Dispensary, immortalized in a painting by LS Lowry, Grade II listed, built in 1828 and threatened with demolition in 2011.

They have had support from all over the world in their fight to stop developers from Urban Splash knocking down its gothic walls once it realized that the cost of renovating it, in their words, made no economic sense.

It has been difficult to keep a vigil going for two years, Jackie tells me but what has kept it going has been the great camaraderie in the group and the friends and supporters they have made during that time.

Last year, Urban Splash, who are developing the area around New Islington withdrawn listed building application to demolish the Dispensary to provide time for a new initiative to be developed with the backing of Heritage Lottery funding money.They were awarded a £10,000 restoration grant to get the process going but suffered a knock back when it was announced their application for initial support under HLF’s Heritage Enterprise programme was unsuccessful.

Now the group are waiting on news of their latest bid that will include plans to turn the ground floor of the building into a community space and attract tenants for the other two floors.

Andy Britner’s family can trace their roots in the area to 1915, when they moved into the lock keepers cottage on the Ashton Canal.His father was born in the house in the 1920’s and it was only in 2001 when their connections with the cottage ended.He remembers a bustling community, the hospital car park full and Stubbs Mill, also lying derelict behind the Dispensary when it opened as Steptoe’s market and Silvana’s a working mill which sold clothes to the general public.

‘When you walked along the road, all you could hear was the sound of machinery’, he tells me…. But now they have ripped the heart out of it.’

This is New Islington,its name bringing connotations of New Labour fiefdom,deals in restaurants over Polenta and Victorian grand houses with fuchsias dangling from hanging baskets,one wag referred to it as Manchester Labour Party’s Vietnam.

It is the domain of Urban Splash, the baby of Tom Bloxham MBE,charged with transforming a decayed Urban landscape into a millennium dream via the architect’s Will Alsop’s vision that he sketched whilst downing a glass of wine.

The Dispensary is all that is left of the old.Although it dates from the 1870’s the history of the dispensary goes back to 1828 and opening on Great Ancoats street.

It’s patron was the Mayor and it was funded by George Murray James MCDonnell,who factories employed many of the people in the area.
It was staffed by two surgeons and two physicians who were both appointed young,Dr Pendlebury who was to move to the Manchester and later to the. Chorlton infirmary and James Philips Kay who was to play a major role in public health in the city and later to be a founder of the Statistical society.

As a dispensary it contained no beds, people were treated as out­patients or visited at home but was to be transform into a hospital thanks in the main to a a donation from Miss Blackenbury, the daughter of a solicitor who had made his fortune from the railway boom.

It moved to its new premises on Mill Street in 1874 and unlike the Poor law infirmaries at nearby Crumpsall and in Chorlton,Ancoats was a voluntary hospital, funded by subscribers and benefactors.

Lowry, as mentioned earlier, painted the scene in 1952 in the waiting room,patients waiting on long wooden benches,bowler hats,some bandaged heads,strip lights hanging from the ceiling,doctors in white coats lurking.

It closed its doors at 9.00 am on Sunday the 1st February 1987 despite protests from the local MP Robert Litherland and a committee of residents,who had staged a sit in and who were concerned that the surrounding hospitals would be out of reach of some of the community and that the alternative sites would be placed under extreme pressure by the influx of new patients.

Andy tells me that the area had had any sense of optimism knocked from it.When council leader Sir Richard Leese spoke recently of building homes that were not of the affordable but of the desirable variety, it summed what had happened to the area up.

Now at least one small part of it can be saved.

The money will be used to develop plans for how the building can be used and to initially stabilize the building. The project will need in total around £4.5m and the hope is that the developers Urban Splash will hand over the building

£78m for the Manchester ‘Factory’

Battle to save Timperley’ Watling Gate