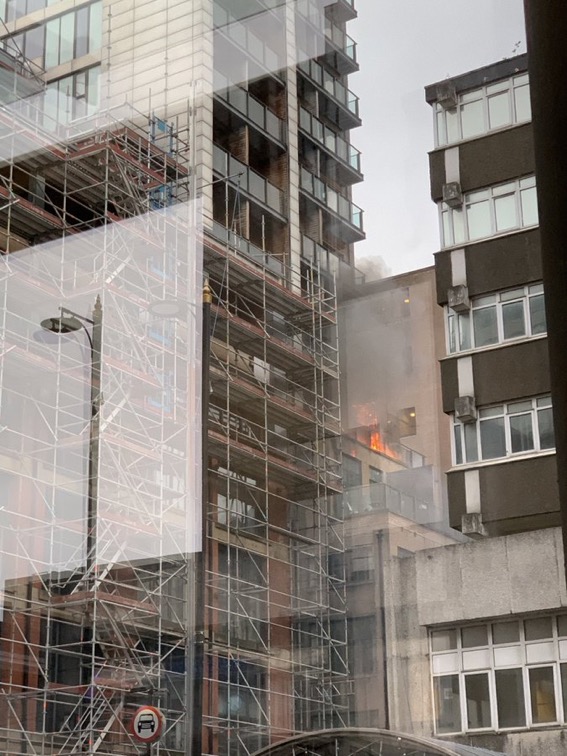 More than seventy people were evacuated this morning after fire broke out on a balcony of a block of flats in Manchester’s Northern Quarter.

GMP officers were instrumental in ensuring those residents affected were able to maintain safe social distancing while GMFRS tackled the blaze.

Working swiftly, firefighters fought the flames from outside using a jet and the aerial ladder, while inside confining the fire and fire damage to four apartments on the fourth and fifth floors.

Residents started to be readmitted to their homes from around 9am.

Tony Hunter, Assistant Chief Fire Officer and Director of Built Environment for GMFRS, said: “This morning’s fire in the Church Street area of Manchester could quite easily have had more serious consequences. I want to praise the swift and professional actions of our firefighters who not only helped local people to safety, with the support of police colleagues, but also quickly contained and then extinguished the flames.

“GMFRS implemented many of the techniques and lessons we have learned from other recent examples of fires in multi-storey residential buildings, including at The Cube student accommodation in Bolton in November, to quickly get this incident under control. In Greater Manchester we have developed some of the most comprehensive and innovative approaches to fighting high-rise building fires in the country, and much of that was successfully deployed this morning.

“However, it is important to recognise that, but for the hard work of the emergency services, this morning’s outcome could have been grave. We are currently investigating the cause of the fire, with initial indications suggesting it started on a residential balcony. There have been two significant fires involving high-rise buildings this week, in Manchester today and in Deptford in London on Wednesday, and both could have resulted in serious injuries or even worse. This morning I am appealing to those people who have homes with balconies to please take extra care, being especially vigilant in extinguishing cigarettes and never using barbecues.”

An investigation into the cause of this morning’s fire has commenced.

Bev Hughes, Greater Manchester’s Deputy Mayor for Policing, Crime, Criminal Justice and Fire, added: “I cannot praise Greater Manchester’s firefighters and police officers enough for their work in the Northern Quarter this morning. A potentially dreadful outcome was averted thanks to their quick actions and the support and co-operation of all the affected residents.

“We believe that the alarm was first raised by a passer-by who called 999 after spotting smoke coming from one of the building’s balconies, followed by the internal fire alarm. I would like to thank that Manchester resident for their actions in alerting the emergency service, which may well have contributed to no-one at the incident sustaining any serious injuries.

“This morning is a great example of Greater Manchester’s emergency services working together to keep out residents safe. During these unusual and challenging times it is heartening to know that, in a crisis, our frontline workers are still there, working 24/7 to keep us all protected.”

Detectives searching for a missing Marie have released images of a couple that may...