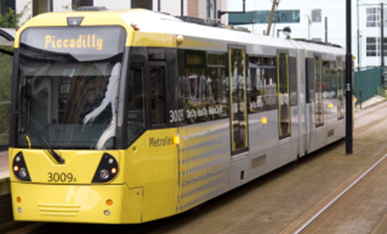 Manchester’s Metrolink system has received Government funding to keep it running until at least the end of July.

The service, which returns to a 12 minute frequency from next Tuesday was included in a package announced by the Transport Secretary Grant Shapps which guaranteed additional funding to increase frequency and capacity of bus, tram and light rail services, to help people travel safely during the Covid crisis.

Metrolink has seen its revenues plummet since the beginning of the lockdown.

Greater Manchester’s Mayor Andy Burnham said: “Today’s announcement by the Transport Secretary gives us most of what we need to keep running Metrolink for the next two months and I would like to thank him for listening to the concerns I have raised.

“Of course, concerns remain about what will happen from August. I believe the recovery process in cities like ours would be strengthened by having the ability to plan for the longer-term. Last week, Ministers announced a funding package for London that runs until October and I would encourage them to consider extending the timetable for Greater Manchester’s deal in the same way.

“We fully support the Government’s ambitions on creating more space for cycling and walking and welcome the additional funding that has been announced. The political consensus around prioritising active travel is becoming stronger by the day and this is emerging as one area where the country is set to build back better.”