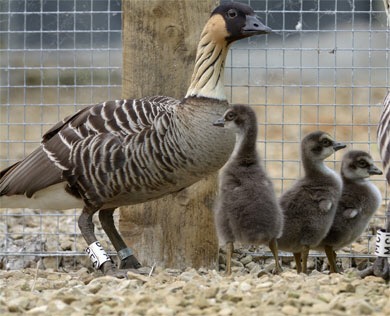 hatched at WWT Martin Mere Wetland Centre. Only about 1,000 Nenes – pronounced ‘nay-nay’ after their call – survive in the wild in their native Hawaii.

The Nene goslings usually hatch mid-March but spells of cold weather has ensured things are running a little late this year. The Nene (also known as Hawaiian Goose) is popular at the centre for being one of the birds that will actually take bird food from the hand and is an enjoyable attraction for children and adults.
The Hawaiian goose represents WWT’s greatest conservation success story by breeding the birds in captivity and releasing them in the wild. The reintroduction programme started at Martin Mere in the 1980s when just three eggs were delivered to the centre and there are now approximately 60 Hawaiian Geese in the grounds.

The goslings, born on Wednesday 3 June, have already attracted a lot of attention from families visiting the Centre.

Sometimes known as Lava geese, Nene’s are the only waterfowl adapted for life on lava flows. An estimated 25,000 Nene’s used to inhabit the Hawaiian islands, but following the arrival of Europeans in 1778 their numbers immediately began to decline. The introduction of the mongoose in 1883 then seemed to seal their fate as it prayed voraciously on eggs, chicks and adults alike.

By 1907, the Nene was recognised as a protected species, but this seemed too little too late and only 20 or 30 birds survived by 1949. A major re-introduction programme was launched which saw Sir Peter Scott bring over two of the only remaining Nene’s in the world from Hawaii, then WWT went on to release more than 200 of them back to the wild over the years helping to save the Nene from extinction.