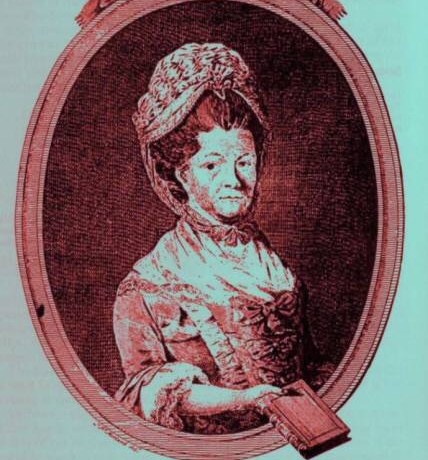 In the latest of our series of the twenty women nominated for the honour of having a statue, we look at Elizabeth Raffald.

Thanks go to Suze Appleton for help in writing and researching this article.

Elizabeth was an extraordinary superwoman who lived in Manchester just before the tremendous expansion in the Industrial Age, an age when a married woman had no legal rights of her own.
All her businesses had to be in the name of her husband, a talented gardener who, as the papers put it then, ‘turned to intemperance’, possibly on the proceeds of Elizabeth’s businesses.
Her achievements would daunt any of us today, but from the time she moved to Manchester in 1763 to her death in 1781 she had achieved several remarkable ‘firsts’ including:
A cook book, the first to contain only original recipes, and a definitive work of instruction for cooking and fine dining with over 800 recipes. It was reprinted 13 times officially with 23 pirate versions produced, including one for America.

The first recipe for wedding cake, (she called it Bride cake in her cook book, The Experienced English Housekeeper), the instructions for double icing a cake with almond icing under royal icing, and a recipe for sweet patties strongly believed to be the basis of the modern Eccles cake.

Elizabeth was born in 1733 in Doncaster and is thus the earliest women to make the list, her last 18 years spent in Manchester.  From the age of 15 she worked in domestic service, rising to the rank of housekeeper at Arley Hall in Cheshire. Once married she set up her first confectionery shop, a kind of deli, in Manchester’s Fennel St and soon became renowned for her catering knowledge ad skills.

She catered for the officers mess in Manchester, the Exchange coffee house and Kersal races, Co-founded Prescott’s Journal and Co-owned Harrop’s Mercury for which she wrote also articles, as well as co writing a book on midwifery with the eminent surgeon, Charles White.

She had given birth to 9 children, only 3 of whom survived to adulthood.

Elizabeth died in 1781, and was buried, not in Doncaster where she was born, or Manchester where she lived, but in Stockport at the parish church just up the hill from the pub, where her husband’s family had a family vault.

The gravestone is still there but in a part of the graveyard overgrown and unsuitable to access, her name not added to the stone. She was buried swiftly at 7am one morning in April 1781 shortly before her husband signed over all their possessions, and debts, and left for London.

Six statues are to be brought to life in Manchester