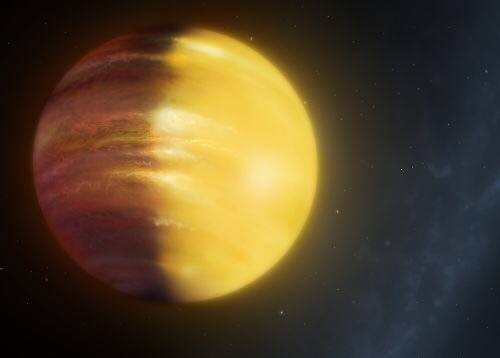 Weather detected on HAT-P-7b – a planet 16x larger than Earth, over 1000 light years away – thanks to University of Warwick research.

Signs of powerful changing winds have been detected on a planet 16 times larger than Earth, over 1000 light years away – the first time ever that weather systems have been found on a gas giant outside our solar system – according to new research by the University of Warwick.planet

Dr David Armstrong in Warwick’s Astrophysics Group has discovered that the gas giant HAT-P-7b is affected by large scale changes in the strong winds moving across the planet, likely leading to catastrophic storms.

This discovery was made by monitoring the light being reflected from the atmosphere of HAT-P-7b, and identifying changes in this light, showing that the brightest point of the planet shifts its position.

This shift is caused by an equatorial jet with dramatically variable wind-speeds – at their fastest, pushing vast amounts of cloud across the planet.
The clouds themselves would be visually stunning – likely made of up corundum, the mineral which forms rubies and sapphires.

The planet could never be inhabitable, due to its likely violent weather systems, and unaccommodating temperatures. One side of the planet always faces the star, because it is tidally locked, and that side remains much hotter than the other – the day side average temperature on HAT-P-7 being 2860K.

Thanks to this pioneering research, astrophysicists can now begin to explore how weather systems on other planets outside our solar system change over time.

Dr Armstrong comments on the discovery:

“Using the NASA Kepler satellite we were able to study light reflected from HAT-P-7b’s atmosphere, finding that the atmosphere was changing over time. HAT-P-7b is a tidally locked planet, with the same side always facing its star. We expect clouds to form on the cold night side of the planet, but they would evaporate quickly on the hot dayside.

“These results show that strong winds circle the planet, transporting clouds from the night side to the dayside. The winds change speed dramatically, leading to huge cloud formations building up then dying away. This is the first detection of weather on a gas giant planet outside the solar system.”

The work was led by the University of Warwick, and performed by a team of scientists from Warwick, Queens University Belfast, Dublin City University and University College London.

Transferring Money From the UK: The Best Way To Do It