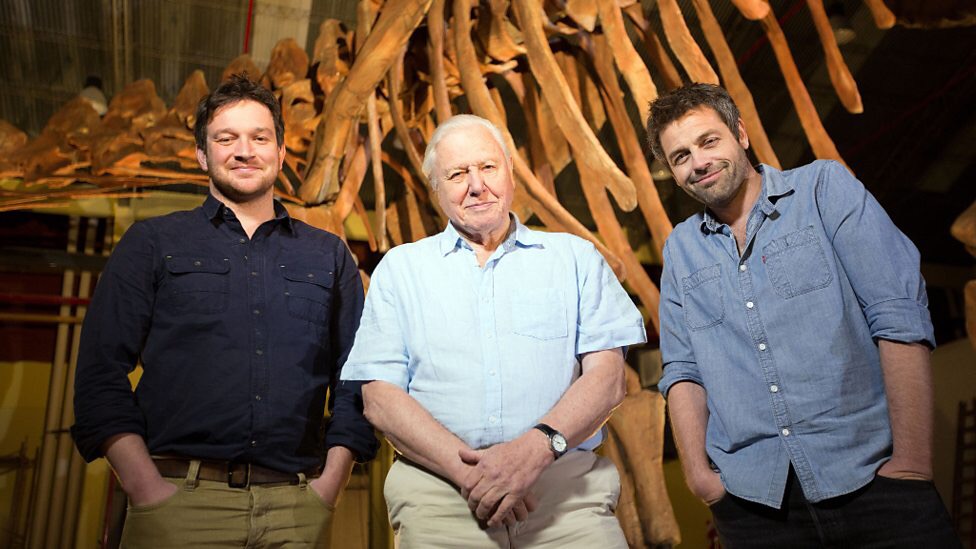 Sir David Attenborough will tell the story of the fossil discovery and reconstruction in Argentina of the largest known dinosaur, a new species of titanosaur. Measuring 37m long – close to four London buses put end to end – and weighing 70 metric tons, latest calculations show that this new giant titanosaur is the biggest animal ever to walk the earth.
In 2014, a shepherd spotted the tip of a gigantic fossil bone sticking out of a rock in La Flecha Farm in the Chubut Province in the Argentinian desert. When the news reached palaeontologists at the Egidio Feruglio Paleontology Museum (MEF) in Trelew, Argentina, they set up camp at the discovery site. The first bone turned out to be a 2.4m long (femur) thigh bone, the largest ever found. By the end of the dig they had uncovered more than 220 bones. As the programme reveals, these fossils came from not just one dinosaur but seven, all belonging to a new species of the giant plant-eating titanosaur which is yet to be given its own scientific name.

Dr Diego Pol, lead scientist on the excavation based at the – Museum of Paleontology Egidio Feruglio, Trelew, Argentina said: “It was like a paleontological crime scene, a unique thing that you don’t find anywhere else in the world with the potential of discovering all kinds of new facts about titanosaurs. According to our estimates this animal weighed 70 tons. A comparison of the back bones shows that this animal was 10 per cent larger than Argentinosaurus, the previous record holder. So we have discovered the largest dinosaur ever known.”
Filmed over the next two years, Attenborough And The Giant Dinosaur follows the twists and turns of this forensic investigation. He witnesses the uncovering, cleaning and examination of these vast fossils for the first time. Using state-of-the-art graphics the film reveals what scientists think the internal structure of a dinosaur looked like and how it worked.

David Attenborough visits the dig site to witness the uncovering of these vast fossils, and the MEF labs in Trelew where they are cleaned and examined. He talks to the palaeontologists studying the fossils along with comparative anatomy experts, and looks at what the bones reveal about the lives of these dinosaurs with the help of 3D scanning, CGI visuals and animation. Finally, David witnesses the unveiling of a 37m- long skeleton model built by a Canadian and Argentinian team of model makers which represents the newly-discovered titanosaur.

David is joined by Dr Diego Pol, lead scientist on the excavation based at the MEF in Trelew and evolutionary biologist and bones expert Ben Garrod (Secret Of Bones).

Attenborough And The Giant Dinosaur will broadcast on BBC One on Sunday 24 January at 7pm.