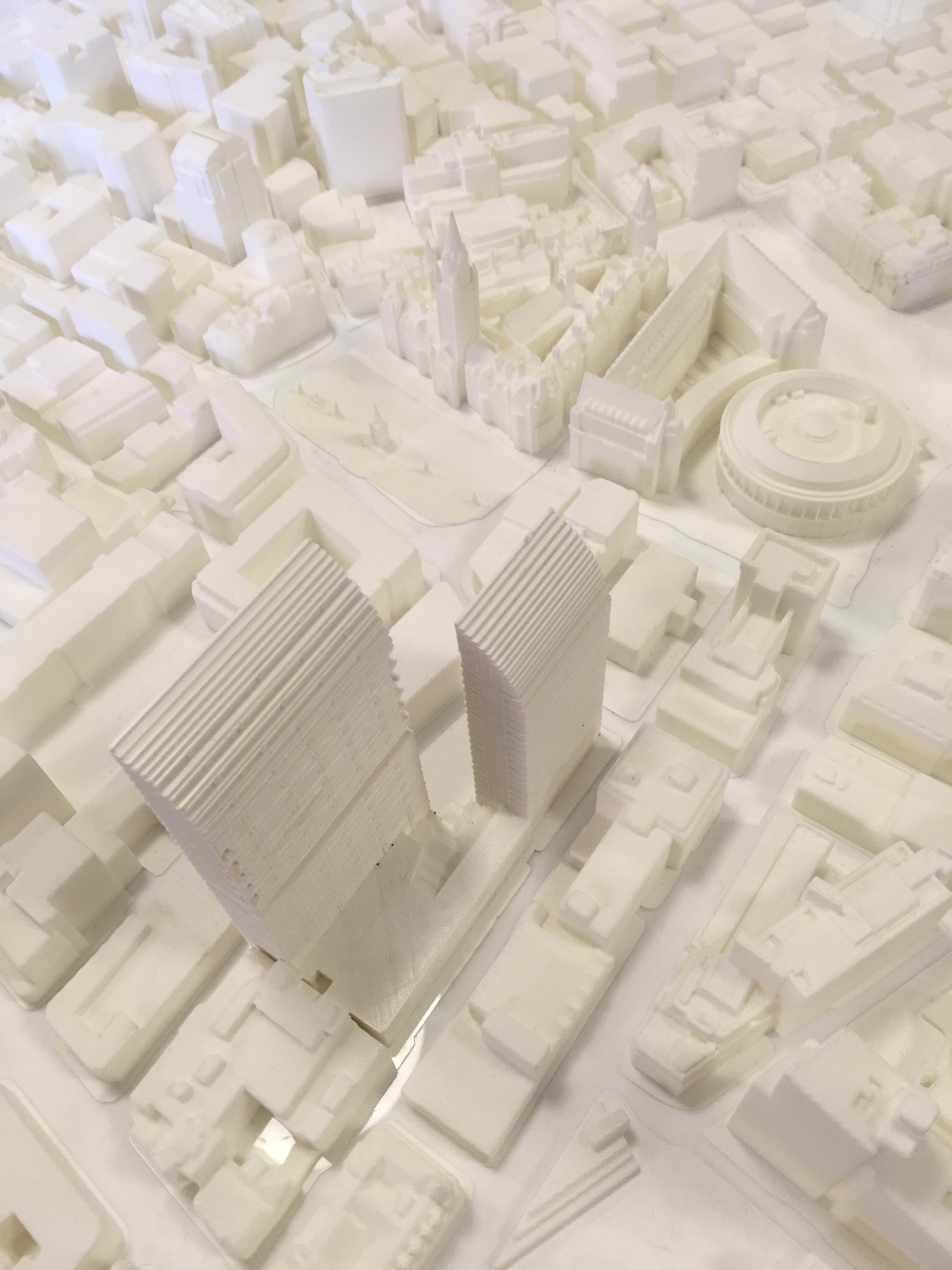 Plans for the redevelopment of Jackson Row were on display for one day only this week in the Central Library and About Manchester went to take a look.

The citizens of San Gimignano in Tuscany,  built their towers, the higher they reached to the sky, the more power and wealth they had, today they stand, bringing in the tourists, few still remain though from the town’s golden period  and their builders long forgotten,

The modern day equivalent are planning to build their monuments in Manchester, Jackson’s Row, a backwater in an ever increasingly vibrant city, once the city centre headquarters of Greater Manchester’s Police, an overbearing building which surely must feature as one of the uglier in the city will be demolished along with an old pub and a synagogue.

Few will mourn its demise but many are already lamenting the passing of the Ralph Abercromby pub, caught in the middle of this development, one of the few old boozers left in the city centre, will be flattened to be replaced by public spaces, high rise living, offices, shops and entertainment

Led by the 21st century equivalent of those Tuscany merchants, a group of ex footballers and to the chagrins of many, backed by Chinese money, two skyscrapers, will be joined by a five star hotel and a split level public plaza.

It was difficult to really understand the concept staring at a 3D model all in white, with the development, a small point of reference in the centre of the conurbation, strategically extended to include Manchester’s other towers to show that these weren’t as tall as existing monoliths though as one person reminded me on twitter, they did have the look of Orwell’s Ministry of Truth about them. “which way does the sun shine”, I asked one of the architects, concerned that they may bathe Albert Square in semi permanent darkness, only to be reassured that only the sun rarely shines from a Northerly direction.

This was a PR exercise, there were plenty of PR people buzzing around, trying awfully to be helpful without really committing. Of more interest was the lady from Saddleworth, once of Crumpsall, Sir Richard’s ward, who had moved out of Manchester in disgust at the way the city was going. “It’s for the rich and doesn’t belong to the ordinary people any more” adding that it has all been agreed anyway by the two Sirs Bernstein and Leese so whatever the public think it is too late.( The PR lady at this point is furiously shaking her head, though she admits she knows little of Manchester’s internal politics.)

Of course Sir Richard has already nailed his colours to the flag bemoaning the good citizens of Manchester for their dislike of tall buildings, I wonder if the citizens of Tuscany had the same worries. Opposition though is building, 4000 plus signatures, English Heritage and now the 20th century society who have not taken to kindly to the Bootle Street Police station being wiped from the earth’s face. The Jewish community will be getting a brand new synagogue and the Abercromby pub, well there’s another story for a later date.

I strangely found myself sticking up for the poor PR girls against some serious opposition from the members of the public. Yes I think I think something needs to be done with the area, it has been a backwater for too long but no I am not sure that we need more office space. high rise living and restaurants and bars. How many more developments like this are in the pipeline. Our local politicians have still not learnt that trickle don economics does not work. If this is such an important development for jobs, then let’s site it in East Manchester now that we have these wonderful transport links and there are schools that the residents of these new tower blocks can send their children to. On the other hand if it is just about bars and financial call centres then let’s be honest rather than try to justify with job creation statistics.

A big round of applause to the people from St Michael’s in hosting this show and letting the public vent their views but I’m kind of thinking the lady from Saddleworth may be right. Incidentally a plague in 1348 decimated two thirds of the population of San Gimignano, beginning a long period of decline for the town in the shadow of the dominant Florence.