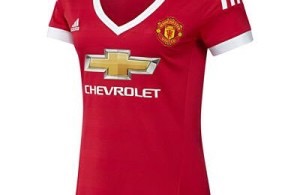 The new kit, the product of a £750million ten-year deal with Adidas signed earlier this summer, has irked the ladies due to its plunging neck line has been labelled as being sexually discriminating on social media.

The men’s kit, by contrast, has a more traditional neckline.

The strip, unveiled last week and signalling the end of a thirteen year deal with Nike, has according to the club statement:

“Taken inspiration from classic three-stripe United kits from the 1980s, adidas have reengineered these iconic designs with a modern twist, taking familiar style features that were loved by the fans and combining them with the latest performance technologies to produce innovative, modern classics.”

It was designed by Inigo Turner, a lifelong United fan, who has said the idea behind the jersey was about retaining the vintage look.