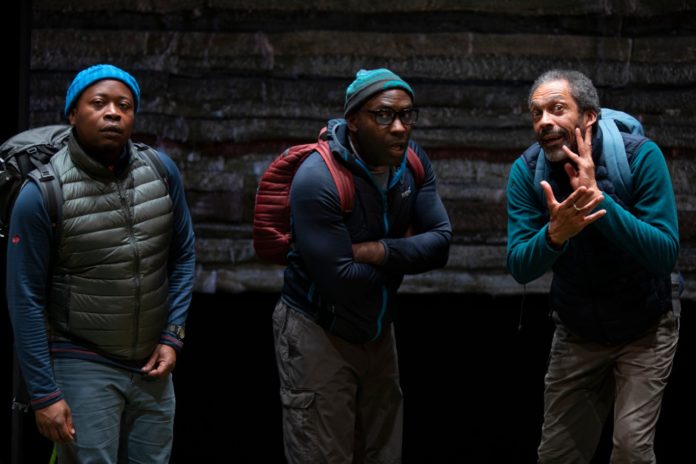 Black Men Walking tells the compelling story of three middle-aged Black men: Thomas, Matthew and Richard, who meet every month as part of a walking group to explore the dramatic landscape of the Peak District in Yorkshire.

On this particular trip, the rest of group cancels and it soon feels like maybe they should have done too. The men find themselves forced to walk backwards through two thousand years of Black history, embarking on a dangerous journey that invokes an element of the supernatural, an encounter with the spirits of their ancestors and an exploration of what it means to be both Black and British today.

The Sheffield-based walking group which inspired the production was founded in 2004 by a group of men of African and African-Caribbean heritage who started walking for health, wellbeing and camaraderie.

The first work staged as part of the Eclipse’s ground-breaking ‘Revolution Mix’ movement, which is delivering the largest ever national programme of Black British stories produced and performed in UK theatres, Black Men Walking premiered at the Royal Exchange Theatre, Manchester in January 2018.

Nominated for UK Theatre’s Best New Play Award and The Writer’s Guild’s Best Play Award, the original production was conceived by Eclipse Theatre in collaboration with Leeds-based rapper Testament and directed by Dawn Walton. The play won rave reviews for its exploration of complex themes including race and identity, expressed through dramatic story telling which mixes prose, poetry and original music.

‘Signals’ to Bring a Hint of Magic to the Stage