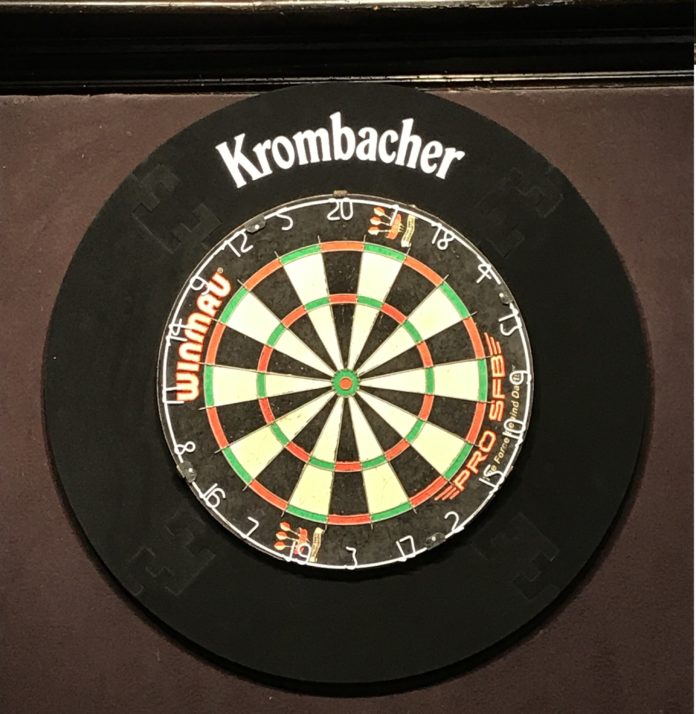 Germany’s leading premium beer brand Krombacher has announced the dates of its next charity Krombacher Darts Challenge, which will be held at craft beer bar – Cask Ancoats in Manchester.

Raising money for the local Mustard Tree charity, the Krombacher Darts Challenge at Cask Ancoats will be open to the first 32 players who register with heats taking place on the Tuesday 19/11 and Wednesday 20/11.

16 players will compete each night over three sets of 301 in a knockout with the first matches starting at 18:30.

Four players from each heat will then make it to the Grand Final on the 27/11 where finalists will battle it out over five sets of 501 for the championship.

The competition is open to all those of drinking age and the following prizes are being offered to the winners and runner ups of the Grand Final:

Players are asked to pay a £5 fee to secure their place in the hotly anticipated competition for which they will receive a complimentary pint of Krombacher Pils on arrival. All registration money will be donated to the local Mustard Tree charity.

The Krombacher Brewery is the official beer partner in Europe of the Professional Darts Championship with its Pils pouring at all PDC events in 2019 with the exception of the UK events.

The brand launched its inaugural Krombacher Darts Challenge in 2018 at the famous darts pub Nolan’s in Vauxhall with the aim of giving a boost to grassroots darts in pubs around London.  The hugely successful challenge attracted over 50 players of varying standards and was eventually won by Diogo Portela, Brazil’s number 1 player. A second competition was run at the Kings Head in Sussex earlier this year.

“Dartboards have been disappearing from pubs in the last decade and it’s a crying shame. Whether it’s to make more room for food covers or due to closures, the opportunities for people to play darts are diminishing by the day.  We’re incredibly proud of our dartboard and after hearing great things about the Krombacher Darts Challenge, it’s brilliant to offer our regulars and those interested in their arrows an opportunity to come down and have a throw, while raising some money for the Mustard Tree charity.”

For further information on the challenge, the rules or to book your place, contact Warren at Cask Ancoats on 0161 392 0809, email caskancoats@gmail.com or visit the bar.

Restore the Mind, Body and Soul this Winter with Rena Spa at the Midland’s...