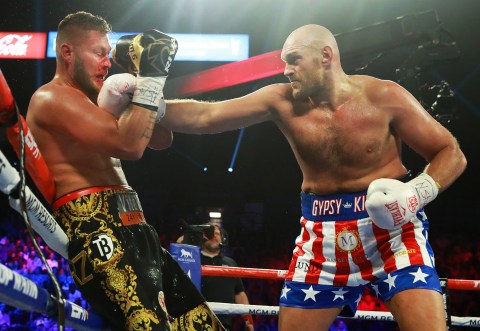 Wythenshawe’s Tyson Fury has extended  his unbeaten run of fights to 25 after knocking out German Tom Schwarz in the second round in Las Vegas overnight.

It was Fury’s first bout since his controversial draw against Deontay Wilder in December 2018, and afterwards confirmed he will fight again in September or October and is also hoping to fight Wilder once more in a rematch next year.

“Thank you America and God bless you all! The key tonight was to enjoy myself, use the jab, I was slipping and sliding.

“I put on an extra 12lbs and I really feel it, I’m back, the lineal champion, bring them all on!”

The thirty year old put Schwarz to the ropes in the second, driving a right hand home to drop the German to the floor.

Seconds later, with Schwarz bloodied and under attack, his corner threw in the towel as the bout was waved off.