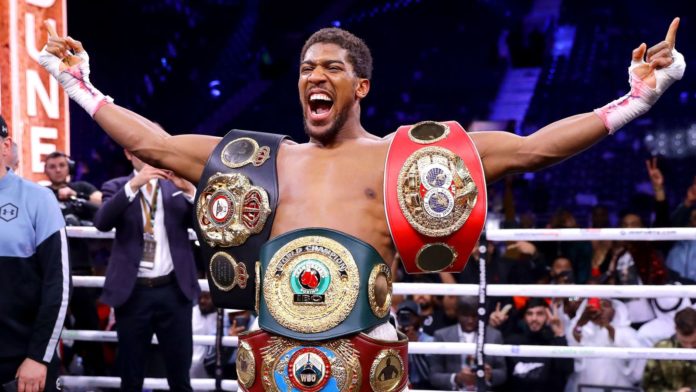 189 days prior to this, the biggest fight of AJ’s career, he had been shocked by Ruiz inside Maddison Square Garden, the Mecca of boxing. In a devastating turn of events, the Olympic Gold medalist was stopped in the seventh round after being on the canvas four times.

Rumours flew around the Watford heavyweights camp. Fueled by a heated in-ring argument between Joshua’s father and Eddie Hearn, the fighter’s promoter.

Was AJ knocked out in sparring ahead of the bout? Did he have a panic attack in the back before making the walk to the ring? Did the nerves get the better of him?

Not one of the theories were verified by the AJ camp who maintained the better man won on the night, but this did not stop them being distributed through the press and social media.

A brief point of note on this journey is the one occasion Joshua said that the punch that wobbled him was a ‘punch from the gods’ potentially alluding to an element of luck on Ruiz’s part. The comment was swiftly taken out of Joshua’s answers in future interviews and when questions did surface surrounding it he insisted he did not mean Ruiz was lucky.

That is how we got to December 7th, Clash on the Dunes, unified Heavyweight Champion of the World Andy Ruiz taking on the man he snatched the four belts from.

In heavyweight boxing history, there has now been ten occasions when a fighter who held the belts and lost them flew straight into an immediate rematch.

The one immediate rematch that stood out as the closest comparison was Lennox Lewis and Hasim Rahman. With Lewis looking towards a super fight with Mike Tyson, Rahman looked like a tune-up fight for the British Canadian heavyweight.

In the final minute of the fifth round, Rahman backed up Lewis with several jabs. As Lewis started to walk off the ropes he was met with a huge right hand from Rahman which cleaned him out and he could not answer the ref’s count. Lewis was dethroned by a 20/1 underdog.

209 days later Lewis righted the wrong in a fourth-round stoppage of Rahman with a stunning left hook right hook combination that ended the night for Rahman.

The reality of AJ’s journey was vastly different in the details.

Ruiz’s style was all wrong for him. In the build-up, numerous boxing experts referred to Ruiz as AJ’s ‘bogeyman’. Due to this, the fight was widely considered a 50/50.

By the end of the night, AJ had shown the world that the first result was due to his own mistakes, a flaw in his style that had been present for some time.

Rewind back to 2015 when Joshua took on rival British fighter Dillian Whyte. AJ hurt Whyte when he was looking for the finish he got reckless leaving himself exposed to a power punch from Whyte which stunned him. Joshua weathered the storm on that occasion ending Whyte with an uppercut.

Again in 2017 when he took on Wladimir Klitschko in what was one of the best fights of recent times, Joshua forced his opponent to the canvas in the fifth round only to find himself once again victim to a power shot from his opponent in the next round as he was looking to end the fight himself. A heavy knockdown which saw him come close to tasting defeat for the first time.

The same thing happened in the first instalment of the Ruiz fight. The Brit landed a heavy left hook in the third round to Ruiz and knocked him down for the first time in the Mexicans career.

However, Ruiz climbed off the canvas to hit Joshua on the temple which sparked the chain of events that led to one of the biggest upsets in boxing history.

This time AJ was different. He came in lighter, less muscle-bound and more focused.

His plan for the fight perfect, boxing on the back foot, using his range and size against the smaller man. It was very rare that AJ allowed Ruiz on the inside to slug it out in a firefight. But that is what was needed on this occasion.

Joshua took his place on the list of now four fighters who had regained their titles immediately. He was added to Floyd Patterson, Muhammad Ali and Lennox Lewis, some of the greats of the heavyweight division

Fights with Fury and WBC Champion Deontay Wilder now back on the horizon it seems that AJ has regained the momentum in his career.

Viewers were treated to a more mature and refined boxing performance from Anthony Joshua in his rematch, something that will surely improve his chances in future, more difficult bouts.