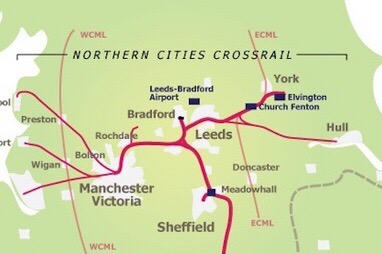 Fresh figures reveal the North of England is six-times less funded than London on infrastructure, according to a leading think-tank’s analysis.

Secretary of State urged to adopt pro-business “North First” agenda to boost UK-wide growth. Such a ‘North First’ approach to transport, which makes the most of the North’s economic assets, would boost productivity.

The stark contrast is outlined in a letter from IPPR North to the new Secretary of State for Transport, urging him to develop a “North First” approach to infrastructure investment.Most of the UK’s future infrastucture investment is in London and England’s South-East, the letter warns.

But a focus on the North of England, including its world-leading cities, ports, national parks, energy assets, £300 billion economy and 15 million citizens, could unlock real and fair prosperity.

The letter also urges the Transport Secretary to focus on four key priorities:

As part of the government’s new industrial strategy, using record-low interest rates to raise £50 billion “catch-up cash” to invest in northern road and rail priorities, to unlock the vital private and foreign investment that such schemes will ultimately need. Theresa May and Phillip Hammond have indicated support for increased borrowing on infrastructure as part of a new industrial strategy, and this must be pushed.

Persuading HM Treasury to overhaul its flawed funding model, which is outdated and not suited to driving economic growth. New ways of assessing the benefits of transport scheme, and devolving 10-year budgets, will make for much more effective long-term planning.

Introducing a new Clean Air Act for major cities to tackle toxic air, which kills 40,000 people a year and costs the NHS and the wider economy more than £20 billion a year and ensuring the passage of the Buses Bill through parliament – which, with the creation of Metro Mayors with London-style transport powers in major English cities from next year, will make a genuine difference to the daily lives of millions.

The letter invites the Secretary of State to visit the North and see first-hand the lack of investment – and the growth that a “North First” policy on transport investment could unlock.This makes economic sense as well as being fairer, the think-tank argues; there is strong emerging evidence that the way the Treasury calculates the economic ‘return’ on infrastructure investment is seriously flawed.

Likewise, with small businesses becoming a much larger part of the economy, local decision-making is closely linked to growth rates.

IPPR also urges work to be brought urgently forward on the so-called “HS3” (east-west crossing) – even if this means taking priority over HS2 (north-south).

“The time it takes to travel, on hugely dated infrastructure, between our great regional cities is a national disgrace – this is just not what happens in Germany, Japan or France, with their fantastic rail links, or the United States, with its highly developed regional air travel.

“Given the Brexit result, the North of England must urgently see growing prosperity. A proper east-west crossing would boost northern and UK growth, and must now take priority above all other major transport projects, including Crossrail 2 and HS2.”