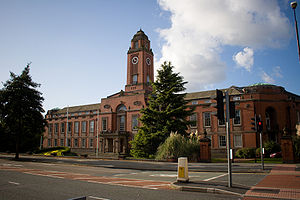 Thousands of pounds worth of damage was caused to Trafford Town Hall in an overnight attack last weekend.

At 2.35am on Saturday 21 January 2017 morning a man approached the Town Hall where he attacked the windows and revolving doors of the building with a hammer. Extensive damage to several panes of glass and the revolving doors was caused which will cost thousands to repair.

Council officers were called to the scene later in the morning to view the damage and start the clean-up operation. The attack appears unprovoked and was caught on the Town Hall’s CCTV security system, which is now being viewed by the police.

Leader of Trafford Council. Cllr Sean Anstee, said: “This appears to be an attack by an extremely angry person and has caused extensive damage to the main entrance to the building. Not only is the cost of repair extensive but this will also cause inconvenience to our staff and customers not to mention the considerable cost to taxpayers to have thee repairs made. Mindless acts of vandalism such as this cost and the council is doing all it can to help the police in identifying this individual so they can answer for their actions. Anyone knows this person or saw anything is being asked to contact the police on 101.”

The main entrance to the building will not be available while the repairs are carried out and staff and customers will be notified of an alternative entrance.