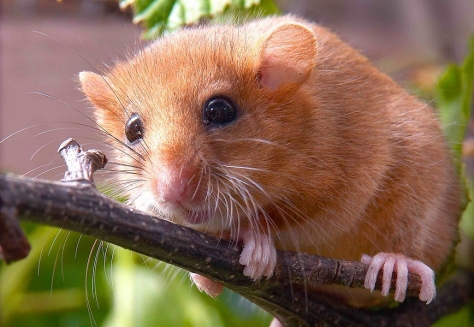 The existence of the UK’s endangered Hazel dormouse is under threat as gaps in tree canopies are leaving the creatures unable to use their hypersensitive whiskers to naturally cross between habitats, a new study reveals.
Dr Robyn Grant, Lecturer in Environmental Physiology and Behaviour at Manchester Metropolitan Unjversity monitored and recorded high-speed videos of dormice and their whisker movements using a camera that captures 500 frames per second.
The videos captured dormice walking on a flat surface, a sloped surface, exploring a gap, crossing a gap, jumping and exploring freely in flat and climbing arenas in near darkness using infrared light illumination.
Gaps in the tree canopy proved to be a major problem for the dormice meaning that gaps in their habitats need to be connected in order to help preserve numbers. Building hedgerows, habitat corridors and dormouse bridges is critical to this species’ survival.

The footage revealed that dormice actively and purposefully move their whiskers to gather relevant information from their canopy at night.
Carried out at the Wildwood Trust in Kent, the research into the endangered species published in the Journal of Comparative Physiology A, shows that dormice use active whisker sensing.
Like other rodents, dormice move their whiskers back and forth continuously in a motion called ‘whisking’ to navigate small gaps and to explore their environment.
Dr Grant said: “Dormice are nocturnal and arboreal – meaning they spend most of their time in branches of trees off of the ground. Their movement within this canopy relies on their whiskers. Hearing, vision and smell also play a role in guiding them around their environments.”

The creatures avoid crossing open spaces between habitats so even very small gaps in the canopy can have an impact on dormouse behaviour.
Dr Grant said: “Although dormice can jump quite large distances, when the gaps between platforms were larger than 10-15cm, the dormice started behaving differently – they would eat less of the food available to them and also spend more time travelling on the floor as opposed to the canopy. This behaviour change would put the dormice in danger as this species is vulnerable to threats on the ground.”
In recent years, there has been a marked decline in dormouse numbers in the UK due to habitat loss, isolation and fragmentation.
This research was carried out at the Wildwood Trust in Kent, in collaboration with the University of Sheffield and funded by a British Ecological Society (BES) Research Grant.