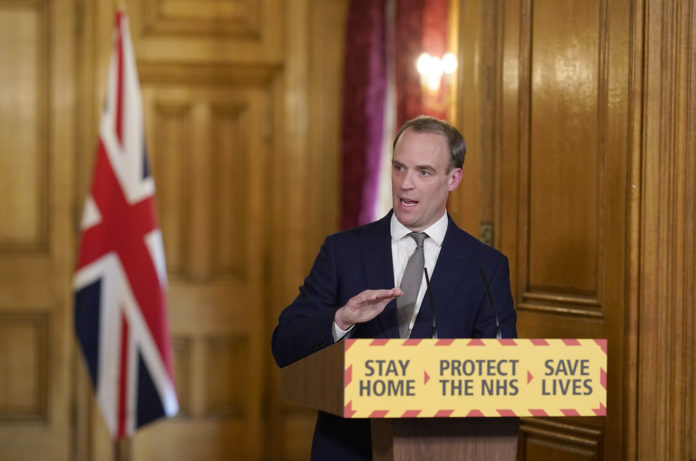 Without setting out an exit strategy the Government in a way set that very strategy out yesterday when Dominic Raab set out his five conditions that need to be met before the lockdown will end.

The problem is that, as it stands, at the moment, we don’t have the means to reach two of them and the blame is largely at the door of the Government.

The first three criteria can easily be measured.Will the NHS be overwhelmed by new cases of Covid-19, have we moved beyond the peak, and is the infection receding.

However quite how we get to the last two is uncertain.Number four requires a massive ramp up of testing not only to get people back into the economy but to understand exactly how this virus is performing.

Meanwhile the final point, how to avoid a second third and maybe many more waves.There are only two strategies out of that, a vaccine which even the best estimates would put twelve months away or the infrastructure to trace and test which could still be months away.

Government ministers are getting angry when the media keep pushing on exit strategy and in the short term they will get away with it through public support and save lives mantra which suggests that the vast majority of the population support the lockdown, more indeed than was first forcecast, something that almost certainly prevented Boris Johnson from imposing the lock down earlier which may, and only may have prevented the deaths to date.

How long that will continue is uncertain, but it won’t be for the months that the fourth and fifth tests would require.

And then there is the economy.We were told yesterday in the Daily Press Conference that the risk of a second or third wave would damage the economy more than continuing the lockdown but when does is that cut off point reached?

We carry this morning a study by the Adam Smith Institute, its headline is “Without a plan to reopen the economy there won’t be one left to reopen.”

“Lives versus livelihoods’ is a false dichotomy, a strong economy is what keeps people fed, housed, and ensures we can afford quality health services.The challenge of reanimating the economy after the lockdown has not been fully understood because of the interconnected nature of the economy.”

Writing in the Telegraph this morning, the Spectator Editor Fraser Nelson makes a very good point

“So with the health service geared up, what, then, is the stated purpose of the lockdown? What are we waiting for to join those European countries taking baby steps back to normality? No one is being told much.

The fear in government is that we will realise, all too late, how much harm that lockdown is doing: and just what is happening to the numerous people who would otherwise be receiving treatment in the NHS. Not just those no longer seeking A&E help or cancer treatment, but those sent to care homes, hurriedly discharged from hospital in the great Covid rush.”

The Government has three weeks now to answer these questions and to give the country some light at the end of the tunnel.

As Robert Peston writes this morning:

“The big point is that we are being ruled by scientists and data, which is not how democracies traditionally function. That would be less concerning if the scientists actually had thoroughly reliable data on how many of us have had the illness and may or may not be immune. They don’t – and they don’t even know when that data will be available.”

Can the new ‘Council for the North’ fuel the Northern Powerhouse?