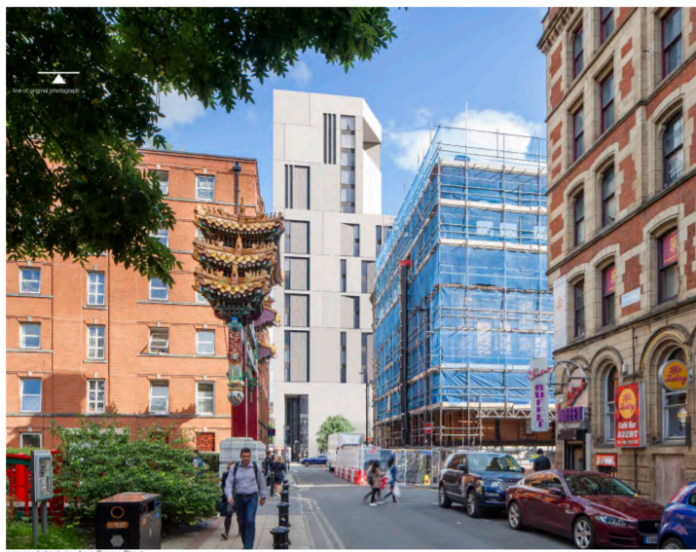 It’s difficult to escape the conclusion that, in Manchester City Centre, consultations are an inconvenient formality to be completed once decisions have been reached. There are some notable exceptions such as Mayfield and this week’s 2nd stage consultation being undertaken by the developers for the Hotspur Press site, but the saga of 55 Portland Street is not one of them, Joe Lynch writes.

The preferred scheme is to demolish the existing 11-storey office tower and replace it with a particularly bland 17-storey hotel; though the current building is not exactly attractive, if it is to be replaced it should be with world class architecture worthy of one of the city’s main thoroughfares.

The new hotel application should not be confused with the adjacent 14-storey hotel and casino currently under construction on the neighbouring plot, both of which have the 55 Portland Street address.

They are also both within Site 1 of the controversial 4-site Portland Street Strategic Regeneration Framework, a document that was launched in December and which has not been popular with many in the LGBT community because of the implications for The Village and for Pride. One would have assumed that the SRF consultation meant exactly that, but the only strategy on display is to press ahead with anything that developers ask for.

It’s especially galling that the Sackville Street car park which has served as the main stage area for Pride is earmarked for a multi-storey car park, which will be “needed” to replace the multi-storey car park above the coach station which will both be demolished. The only nod to the lost 3240m² of available open air space will be 377m² of assigned “community space”.

At a time when Manchester’s air quality has been making headlines an obvious response should be to reduce the number of cars entering the city centre and not to accommodating more. It also represents a lost opportunity to provide more public green space in the centre. As if that wasn’t enough, the lack of joined up thinking is perfectly illustrated by the Travel Plan for this application citing its proximity to the coach station without any mention of the fact that the SRF proposes for it to be demolished and relocated.

It has also not gone unnoticed that exactly the same CG renders used in the Strategic Regeneration Framework are present in this planning application. At best this is an unfortunate, innocent case where the same architects have been used, but the perception is that the SRF consultation will not matter because it’s all a done deal.

So why does this matter? Both the Liberal Democrats (of which I am a member) and the Friends of Manchester Gay Village have independently objected to this application on similar grounds: principally that any planning decisions in this area should be postponed until the Strategic Regeneration Framework consultation has been satisfactorily concluded.

We’re not ideologically opposed to regeneration nor indulging in NIMBYism, but it’s essential that the developments in this area don’t jeopardise the existence of the Village. Heritage is about more than just protecting old and pretty buildings: it’s about the people and the groups who use the buildings to bring economic and cultural prosperity to the city. The Village is an asset to the city as well as an essential safe space for the myriad queer communities in the North West of England.

I lived in London for nearly a decade but Manchester is the first city I’ve called home, and the Village is a big part of the reason why. There has been a spate of LGBT+ venues across the capital closing down because of rising rents and “developer friendly” licensing & planning policies; Soho & Vauxhall in particular have been badly hit and are mere shells of the vibrant communities they once were.

Our city’s leaders need to strike a better balance between perceived as business & developer friendly, and fulfilling their role as guardians of minorities, the marginalised, and of our heritage. The rebuilding of Manchester following the IRA bombing has been a phenomenal success for the most part, but we risk becoming a victim of that success by doubling down on the same strategy again and again. The decisions that reversed the post-industrial decline of Manchester aren’t necessarily the decisions that should be made in the booming city we live in today.

For more information about the Friends of Manchester Gay Village their Twitter is @FOMcrGayVillage and their Facebook page is https://www.facebook.com/FOMcrGayVillage

The blind leading the blind-