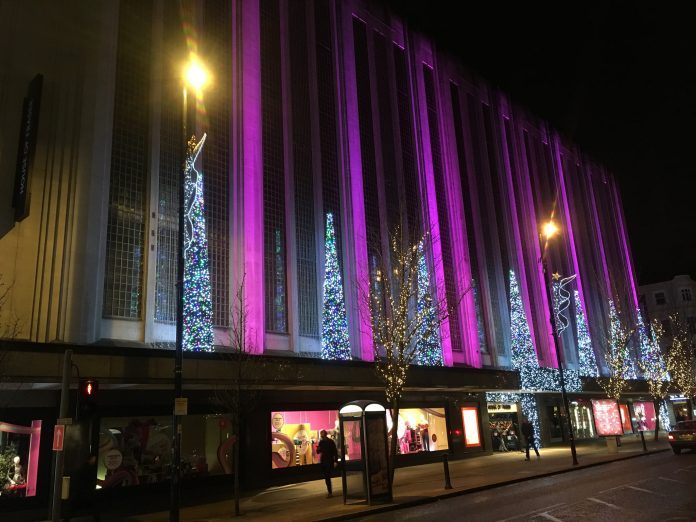 It’s stood on Deansgate since the middle of the nineteenth century,it evokes nostalgic memories of days out,but its future could well be over.

As Mike Ashley’s Sports Direct announced on Friday that the House of Fraser store will close at the end of January,it seems that a journey begun in the 1830’s has come to an end.
The unstoppable rise of online shopping has seen high streets around the country collapse under the onslaught of Amazon,stores such as Kendals with their high floor space and associated costs have buckled under the onslaught.
Professor Dave Spicer, Dean of the Business School at the University of Salford, has a retail background having worked for Woolworths in a store operations role.
“It is interesting that this news has come on the same day that Amazon has announced 600 new hi tech jobs in the city. There can be no clearer sign of changing times. The old retail model is fading away and a new model is replacing it.If retailers aren’t destinations they are vulnerable and I saw that first hand from my time at Woolworths. More focused brands replaced Woolworths and the same looks to be happening here.”
It comes with a proud history but a proud history will never guarantee a proud future,just ask Woolworths.
Is the drive to save it simply a hardback to that nostalgic time that we see through rose tinted specs and should we be looking to the future and reinventing the high street?
The nostalgia even surrounds the name.In 1919 it was bought by Harrods but Manchester would rebel against the Harrods name and it would soon revert to its original title.
It has had a rocky road since then.Fire would sweep through the store on the night of the 11th February 1939, crowds gathered to see flames leaping into the sky, fuelled by the tinder box capabilities of the fabrics and furniture contained within it leaving men’s ware, furniture and fabrics and hairdressing devastated.

Post war, its image flourished, Deansgate was the place to shop if you were wealthy, you went to Market Street otherwise, and it’s success embodied the you have never had it so good symbolism of the consumer boom in the late 1950’.

The economic downturn of the 1970’s saw it begin to contract, the St Ann’s Square site and the tunnel would close and its merchandise became for some less luxurious.

As Manchester rebuilt after 1996, the arrival of Selfridges and Harvey Nicholls would, for the first time, provide rivals and in 2005, the store was bought out by House of Fraser and the name would once again disappear, though once again the public refuse to call it by its new name taking heart from the store’s name being clearly visible on marble fascias above the store’s entrances.

Yes of course we can all sympathise with the staff who face an uncertain future,though what a coincidence that the announcement came on the same day as Amazon said it would be creating 600 jobs in the region.

The City Council,miffed that they were not consulted over the closure by Mike Ashley,  have launched with their mouthpiece Pat Karney, a campaign to save it,but maybe we should learn the lessons of its first founder John Watts.
The original retail entrepreneur who hailed from Burnage and would open a draper store on the corner of Parsonage, eager to sell the surplus of his warehouse empire to a public who were setting out on the vision of shopping.
He got out of retail selling to three of his employees,Thomas Kendall,James Milne and Adam Faulkner and went onto concentrate on the wholesale market.
Maybe Manchester should learn from his lesson and move on?

Can the new ‘Council for the North’ fuel the Northern Powerhouse?