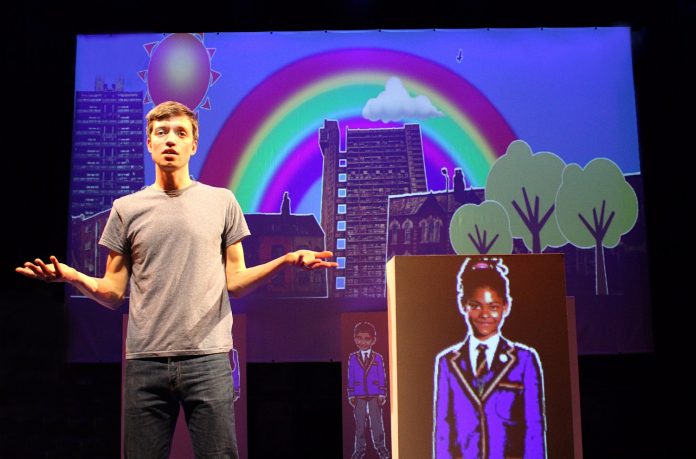 Friends For All is a story about having the confidence to be yourself and stand up for what you believe in and features rapping, dancing and far-out video projections for ages 5-11 and their grown-ups.

8 year old Lexi doesn’t make friends as easily as some. If only her school would allow a non-school uniform day then she could be herself and find others like her. Inspired by Grandad’s hippy stories from the swinging 60s, she decides to fight the powers that be, namely her class teacher, Mr Marsh, and the class bully, Suzy.

Simon Mole is a spoken word poet with an eye for the often overlooked in the everyday. Simon was the first ever Poet Laureate for the London borough of Brent, and is one fifth of the acclaimed poetry collective Chill Pill. Peader Kirk is an artist and director working internationally in the fields of performance and sound art. His work has recently been shown at The Institute of Contemporary Arts in London, The National Theatre of Greece in Athens, and The Hong Kong Repertory Theatre. Friends For All is their 3rd collaboration.

Friends for All is one of several productions that form part of Half Moon Presents, the producing arm of Half Moon, supporting the promotion and development of theatre for young audiences at a national and international level.

Simon Mole said: “I wanted to create a piece of theatre that wasn’t dumbed down for young audiences; something that was exciting and complex enough that they could be an active and creative audience. Friends For All feels like a wide-screen cinematic experience – it features an array of virtual performers and it’s incredible to see how the young people react to them. But there’s also an important message, to empower them to understand that they are able to make change within the world they live.”

Chris Elwell, Director of Half Moon, commented: “I’m really pleased to be working with Simon Mole on Friends for All. Simon has great skill in making spoken word a tangible experience and his cool yet quirky performance effortlessly encompasses themes of protest and revolution for young minds.”

Friends For All was originally commissioned by the V&A as part of the Family Art Fun Programme and inspired by their You Say You Want a Revolution exhibition and developed with support from Apples and Snakes, the Albany, University of Bedfordshire and Birkbeck Centre for Contemporary Theatre. It is funded by Arts Council England.

Creative Project Calls Out for Manchester’s Stories of Culture, Food And Family

25 metre War Horse Panorama to be unveiled at The Lowry