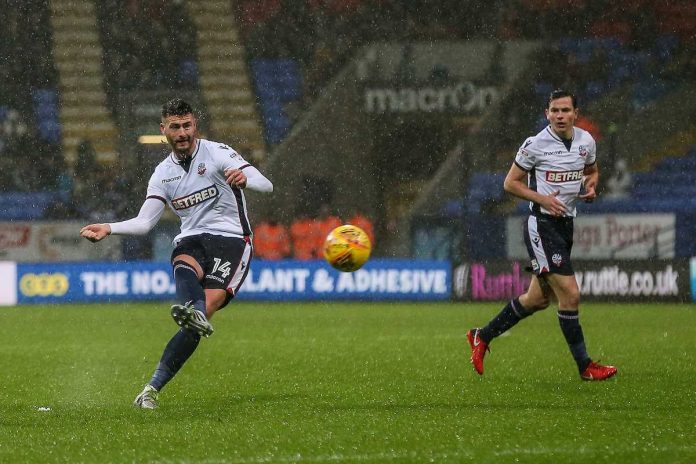 Gary Madine’s first-half free-kick ensured that Bolton Wanderers began 2018 in style as they picked up all three points with victory over Hull City on New Year’s Day.

The striker hit the decisive effort in the 20th minute of the clash, with the Whites standing firm to secure their second win inside three days following on from Saturday’s triumph over Sheffield United.

“Today just backs up the performance we produced at Sheffield United at the weekend – it’s made that result look even better than it did beforehand.

Two games in three days is tough on the legs, but the fitness of the players today looked really good. We can have a bit of a breather for a few days now before regrouping on Thursday when we’ll pick the team to go again against Huddersfield.”

At the other end of the table, it was a miserable start to for the region’s other three clubs.

Charlie Goode’s devastating blow in the 86th minute of the game after a hard-fought performance, scoring a scrappy winner to earn Scunthorpe all three points against Bury, followed the 2-0 defeat at home to Fleetwood Town on Saturday.

“It’s a fight, but we’ll all stick together and there’s no way that I’ll stand back from my responsibilities.” said Rochdale manager Keith Hill after his team’s defeat at home to Blackpool.

“If anyone is starting to put pressure on the situation at the football club then they should put it on me and not on the players, because the players ultimately have to perform to turn the form around and they need support. Everybody needs support when they are most vulnerable – they don’t need kicking.”

After a goalless first-half, the Seasiders broke the deadlock through Nathan Delfouneso nine minutes after the break, before Kelvin Mellor doubled the lead midway through the half.Mark Kitching pulled a goal back for Dale in stoppage time, but they couldn’t find the equaliser despite late pressure.

Meanwhile Oldham Athletic kicked off 2018 with a defeat on the road against Shrewsbury Town.

Shaun Whalley’s close-range effort in the first half earned the Shrews the three points but Latics fought until the end.

Jack Byrne almost equalised on 78 minutes with a powerful strike which was well saved, whilst the biggest talking point came seconds later.