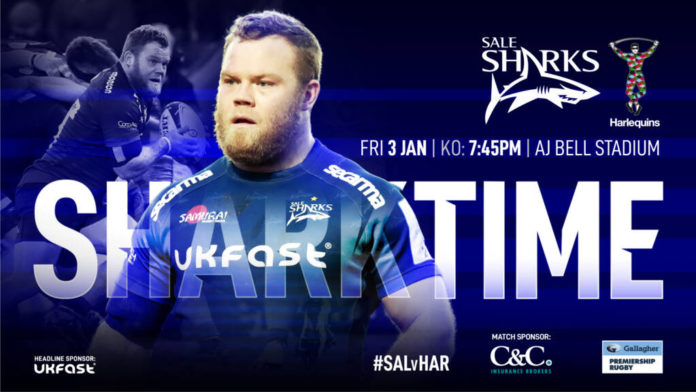 Steve Diamond calls on Sale Sharks stalwarts Ross Harrison and Will Cliff to replace Coenie Oosthuizen and Faf De Klerk for tonight’s round eight match, after the Springbok Internationals picked up injuries in the latter stages of last weekend’s defeat to Bath.

De Klerk suffered a knee injury due to an off the ball challenge at the Rec, whilst Oosthuizen was subject to an ankle strain during the match. Both players are expected back for the next round of Gallagher Premiership Rugby

Harrison moves back into the pack along with Jean-Luc du Preez having both made appearances from the bench in round seven. The rest of the forwards remain unchanged with Jono Ross leading the side from blindside flanker.

Will Cliff moves into the 9 shirt and will partner up with Robert du Preez at fly half tomorrow night. Rohan janse van Rensburg and Sam James remain in the midfield at 12 and 13 respectively with a back three made up of Chris Ashton and Byron Mcguigan on the wings with Luke James at Full Back.

McGuigan is set to make his 50th Sale Sharks appearance at the AJ Bell this weekend.

Sharks fall in the Welsh Capital