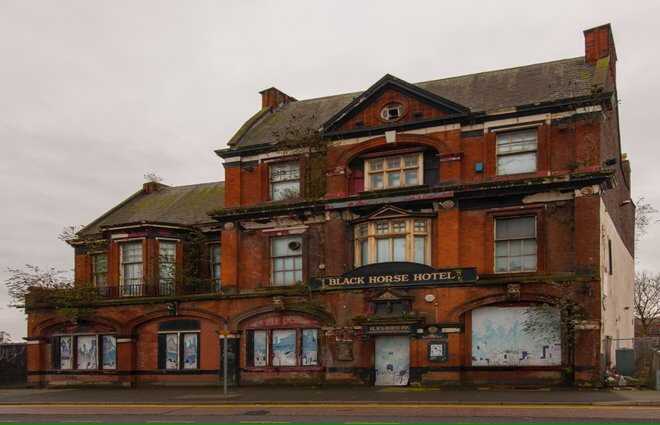 As Salford Council prepare to debate whether Salford’s Historic pub should fall victim to redevelopment, The Victorian Society have joined the battle.

The pub will be demolished under plans by bookie Fred Done to build three apartment blocks just off the A6 at Salford Crescent.

However The Victorian Society is urging Salford Council to reject plans to demolish the Victorian Hotel to build within Salford’s Crescent Conservation Area.

Property (Done) Limited should reflect on the many objections to the plans, including Historic England’s, and come back with a scheme which does not lose a key local building and cause substantial harm to the conservation area says the Society.

James Hughes Senior Victorian Society Conservation adviser said: ‘It’s inconceivable that an experienced and skilled architect couldn’t develop a plan for the site that incorporates the Black Horse Hotel alongside an appropriate – and viable – housing development. This is a large site with huge scope for redevelopment. Salford Council should push for a far more appropriate scheme that actually complies with local and national planning policy.’

” is an impressive late 19th century red brick building on Salford Council’s local list. The Pevsner architectural guide notes the ‘enjoyable carvings in the ground-floor keystones’ which include the heads of a horse, a satyr and Bacchus. Sadly, the building has been neglected in recent years. The exterior, although needing work, is well detailed and largely intact. It contributes positively to the character and appearance of both the conservation area and listed buildings.” adding

“This development is not sustainable, fails to preserve or enhance the character of the conservation area and is contrary to both local and national policy and legislation on the historic environment. The harm caused by the locally listed Hotel’s demolition would be compounded by the proposed new buildings. The height and massing of the towers would be wholly at odds with the scale and appearance of existing buildings within the conservation area and would harm the setting of the listed buildings.”