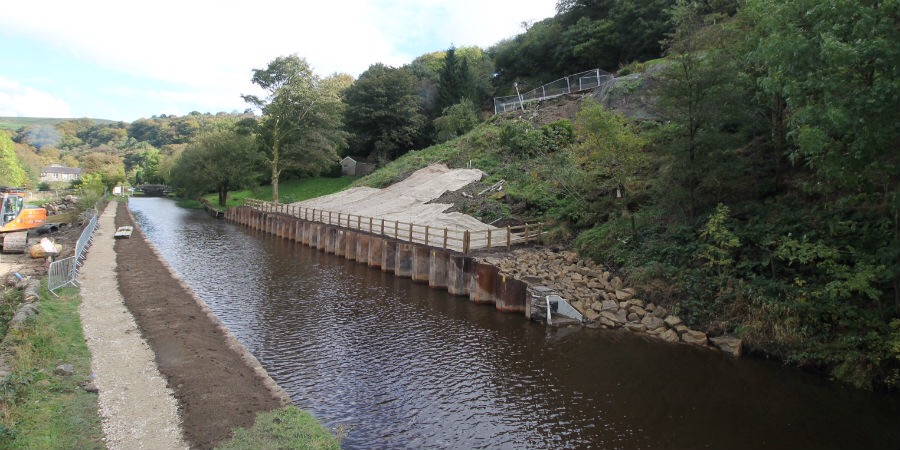 Local businesses, communities and waterway enthusiasts are celebrating as the historic Rochdale Canal fully reopens for the first time since the devastation of the Boxing Day floods.

Engineers working for the Trust, have completed a £3m programme of works meaning that the canal can be reopened to boats for the first time since the floodwaters hit.

The reopening of the canal reinstates an important east-west route for boaters and provides local business and communities with a much needed boost.The flooding, caused when a massive amount of water from the River Calder overtopped into the adjacent Rochdale Canal, left behind a major clean-up operation and a number of complex engineering projects.

The Trust, helped by hundreds of volunteers, has been working hard ever since to clear thick layers of mud and silt from popular walking routes, rebuild damaged canal walls, repair scoured towpaths and remove litter and other debris dumped on paths, lock sides and even in trees.

Some of the most severe damage was around Todmorden where the powerful floodwaters washed away a 15m section of canal bank allowing water to drain out of the canal onto nearby allotments.Since then contractors have been hard at work filling the void in the bank, repairing the canal walls, relining the bed of the canal and reinstating the towpath. The Trust has also restored the allotments so that they can be enjoyed once more.

The local community played an important role in the repairs with the local allotment group giving up their time over Christmas to put sandbags in place to create a temporary canal bank and reduce water loss.

Also near Todmorden a landslip blocked the canal with earth, trees and debris from adjoining land. With the help of local residents who gave permission for access onto their land, the Trust has been able to clear the canal. Specialist contractors installed steel piling along the edge of the canal to protect the slope whilst the earth and debris was removed.
David Baldacchino, waterway manager for the Trust, said; “We’re delighted that the canal can be reopened, it’s a really significant moment for boaters and the local community.

“It’s been a long, hard year and the repairs we were left with to get this 200 year old canal back up and running were far from straightforward. Almost overnight we were faced with a number of really challenging and complex engineering projects.

“I’m particularly pleased for the local community and would like to thank them for their patience and support, particularly at a time when many of them have been affected by the floods personally.

“In so many cases local people have been really helpful – whether that’s by allowing access onto their land or, as in the case of the allotment group at the breach site, rolling their sleeves up and helping us out – and I’m just so pleased that they now have their canal back.”