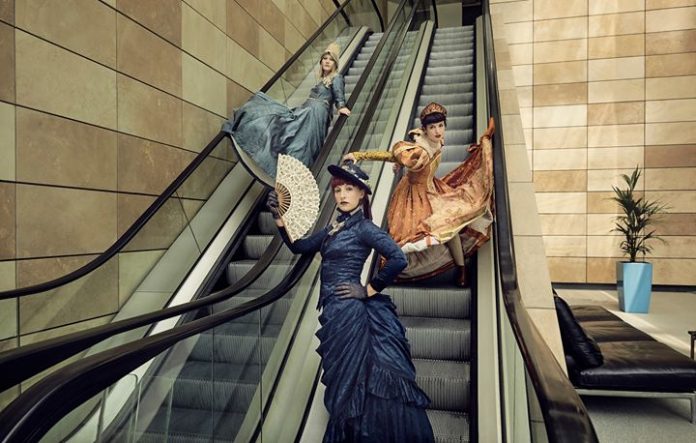 Feminist theatre and music makers RashDash are ripping up Anton Chekhov’s revered 1900 play and reimagining it with electric guitars in Three Sisters by Rashdash, After Chekhov at the Royal Exchange Theatre Studio, 3-19 May.

RashDash – Abbi Greenland, Helen Goalen and Becky Wilkie – take on the roles of the titular siblings Olga, Masha and Irina, to question why the men in this play have all the lines. With a radical take on a classic, join RashDash as they philosophise their heads off in the drawing room and take turn-of-the-century crinolines into 2018.

Abbi, Helen and Becky said, “Three Sisters one of those shows that most directors want to direct. It is thought of as one of Chekhov’s finest plays and it is one of the most regularly performed pieces from the canon.

RashDash don’t often engage with the writing of dead, white men, but it seems like a rite of passage; because it has so shaped our ideas of what makes ‘good theatre’ and because it attracts a certain kind of attention and audience. Our playful approach to a version ‘after Chekhov’ is about the canon, who gets to speak and be heard on our important stages. It neither worships nor attacks the original, it simply asks, what if we were the three sisters? What would we want to say?”.

Three Sisters follows RashDash’s smash-hit multi-award winning two man show at the Edinburgh Festival Fringe 2016 and subsequent UK tour. The company was formed by Abbi Greenland and Helen Goalen at The University of Hull in 2009.

After making several shows together over the years, Becky Wilkie joined the core team in summer 2017. Their work is a combination of radical feminist ideas explored through an articulate physical style in a form that they continue to reinvent.

RashDash have now won three Fringe First Awards and have previously won The Tods Murray Awards for Best Book and Innovation in Musical Theatre and have received nominations for Total Theatre and Off West End Awards.