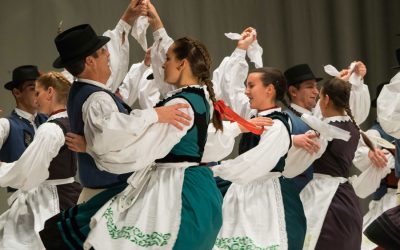 The UK’s only Transylvanian festival of arts and culture, Góbéfest, returns to Manchester from Friday 22-Sunday 24 June 2018.

This year’s free event, in the city’s central Albert Square, promises a larger outdoor stage and extended programme, which will also shine a light on the culture and folklores of other ten European countries, including Romania, Bulgaria, Turkey, Lithuania, Croatia, Hungary, Greece and Slovakia.

Due to the popularity of the food and drink stalls last year– and long queues – an even greater number have been invited. New additions will include a bar selling pálinka, a traditional spirit drink from the Carpathian Basin region that can be anything up to 86% proof. Mancunians will also be able to sample mititei for the first time, a highly spiced and skinless sausage that is a BBQ favourite across Romania.

Main stage acts promise to span every genre and draw from across the Carpathian Basin region of Eastern and Central Europe. They include:

Tamás Szarka and Ghymes is a platinum-selling Hungarian-Slovakian band who have been recording and playing together since the 1980s. A ten-piece, including lute, zither, sax and flute, their sound is rooted in Hungarian and Central-Eastern European folk traditions. Szarka is a virtuoso Hungarian violinist, singer and composer. who has given more that 4,000 concerts in 25 cities from Canada through Europe to Japan.

Harghita National Székler Folk Ensemble is a 19-strong folk dance group from the eastern Transylvanian region of Romania. Sponsored by their local town council in Miercurea Ciuc, they showcase important dance traditions beyond their own Szekerland region, including those of the minority Moldavian Csango people.

Manchester Camerata are Glastonbury openers, UK Ensemble of the Year and ‘Probably Britain’s most adventurous orchestra’ according to The Times. The great Hungarian musician Gábor Takács-Nagy is in his seventh season as Music Director and is steering Manchester Camerata to redefine what an orchestra can do. They will present an Austro-Hungarian themed programme including works by Bartók.

Annamari Dancs is a celebrated singer from the Budapest Operetta Theatre
Hungarian pop superstar Ildikó Keresztes enjoyed performing at last year’s Góbéfest so much she was the first act to be confirmed for 2018.

Selfish Murphy is a Transylvanian Celtic punk band, with a set list that includes The Leaving of Liverpool and Wild Rover. Since 2011 they have been transporting the convivial atmosphere of the Irish pub to Transylvania.

La Mort Subite describe their sound as Balkano Carpathian Franco Greco Russo Turco Gypsy Jazz Folk. “Think of us as conjuring up images of a smoky workers’ bar in Paris, a wild night-time gathering around a gypsy campfire, a drunken Hungarian wedding party in the small hours and a Greek taverna on a hot summer’s evening,” they say.

Attila Miho & Friends was formed in 2010 when violinist Attila was just 17. The band plays authentic folk music which is primarily Transylvanian-Hungarian in origin, but also represents the entire Carpathian Basin.

Enikő Sorbán is a folk singer from the Szeklerland part of Transylvania. As a small child she used to sing all day for the village workers on the nearby fields. With a repertoire of hundreds and songs, she also plays the organ and leads the singing in her local church

Annamária Simo and her band won a competition in 2017 called Transylvania’s Most Beautiful Song. Come and here it in full – and some of their other great tunes.

Tőkés Zsolt & Friends is a six-strong family dance group from Sepsiszentgyörgy, Transylvania. Tőkés Zsolt junior is the child of professional dancers and founder of the ensemble.

Szeredás Dance Group London was formed in 2010 by a group of close friends, who shared a love of Hungarian folk dancing and also wanted to practice their customs and preserve their heritage. They hold regular dances in London, performing authentic dance material originating mostly from Transylvania.

Ti-Ti-Ta Hungarian Folkdance Group is the first Hungarian dance group in the north west. Its members live in Chester and Cheshire.In the family tent, youth arts workers from 10 European countries will lead free music and visual arts workshops, sharing the customs of their homelands with festival goers, as part of Erasmus Plus programme.

Góbéfest was established in 2017 to celebrate the little-known culture and traditions of the Székler people – a group of ethnic Hungarians living in Transylvania, which is part of Romania. A Góbé is a friendly word for a ‘crafty Székely’.

With its roots firmly in Transylvania, Góbéfest 2018 will also showcase the practices and folklores of other minority cultures across Europe.

Event organiser Ottilia Ördög is herself a Székely Hungarian, now settled in UK for almost 30 years and working as a cultural leader. She says: “You have heard all the mysterious myths and legends, now come and experience the magic of Transylvania, right in the centre of Manchester.

“Góbéfest promises to be a unique celebration, offering a dazzling extravaganza of music, dance, cuisine and multicultural activities , captivating the whole family with the authentic and diverse sounds, tastes and flavours of Transylvania and the Carpathian Basin.

“I am really looking forward to involving more cultures in the festival this year, celebrating diversity and difference and welcoming youth leaders from around Europe.”