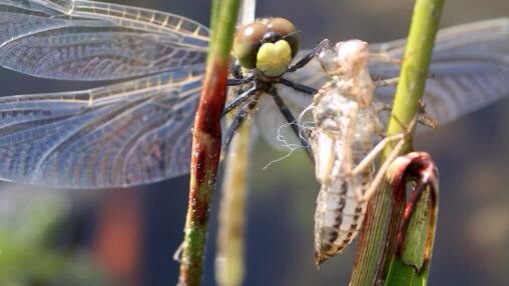 Cheshire’s wildlife experts are celebrating a successful second season in a ground-breaking project aiming to return one of Britain’s rarest dragonflies to the skies above Delamere Forest.

The Trust have been working in partnership with the Forestry Commission to translocate rare white-faced darter dragonflies from sites in neighbouring counties of Shropshire and Staffordshire to former haunts in the popular forest.

The tiny blood-red and black insects, now only found in a handful of locations in Cumbria, Staffordshire, Shropshire and Scotland – were last seen flying in the wild in Cheshire a decade ago in 2003.

This new strategy, which could mark the beginning of the white-faced darter’s comeback in Delamere, has only been used once before in the peat bogs of Cumbria, with the reintroduction scheme only the third ever attempted for a dragonfly or damselfly anywhere in the country.

After 100 white-faced darter larvae were transported to Doolittle Pool a few weeks ago, teams from the Wildlife Trust have now reported seeing the crucial ‘emergence’ stage, where the dragonflies leave the safety of the water and take to the air as adults.

The plan over the coming years will be to continue this annual translocation each summer, in the hope that adult dragonflies will then mate and help to develop a sustainable long-term white-faced darter population once again in Cheshire.

Dr Vicky Nall, leading Cheshire Wildlife Trust’s reintroduction project said: “This is always a tense time of year as we await the first tentative emergence of the white-faced darters, and begin the painstaking process of counting the dried larval cases they leave behind as they take to the skies for their maiden flight”.

“We’ve been blessed with a relatively consistent warm and sunny spring so far, and the signs are good for a successful number of adults making their way into the air this year.”

Burnley Medieval Masterpieces to be Shown in London Exhibition