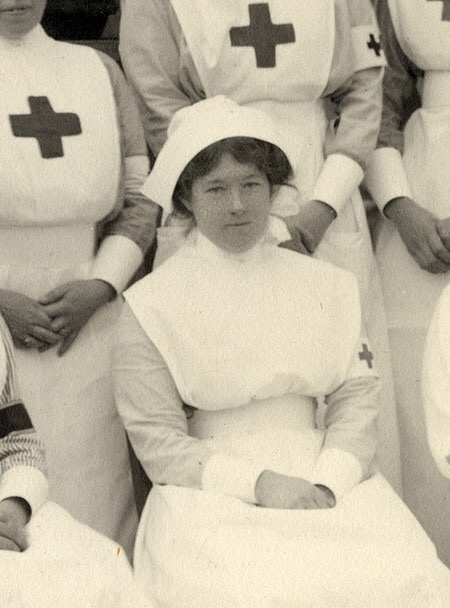 The identity of a First World War Chester nurse named ‘Self’ in a historic photo album has now been revealed.

Archivists were seeking the identity of a First World War nurse who compiled a moving pictorial record of the days when the 2nd Duke of Westminster’s palatial mansion served as a hospital for wounded troops.

The album of 300-plus photographs depicting nurses and their patients amid the huge Gothic splendour of Eaton’s Waterhouse Hall, was acquired by archivists from a Chester book shop in 1979. Several of the pictures in the album, dating from 1914-17, show their creator in her nursing uniform, although they are captioned simply with the word ‘Self’.

An appeal was launched last year but produced no response until now. Thanks to detective work by Professor Alison Fell of the University of Leeds and Chester archivist Liz Green, the mystery may have been solved. ‘Self’ is now thought to be Mrs Caroline Allwood (nee Haworth), who lived at Gorstella, Dodleston from 1914.

The album was taken to an event at the Imperial War Museum North (IWMN), arranged by the five First World War Engagement Centres to connect local community First World War projects with academic expertise.
Within 24 hours, after referring to the British Red Cross online index to World War One volunteers, the 1911 census and British Newspapers online, Professor Fell reported “I think I’ve got a candidate for your ‘Self’ in the lovely album you brought to IWMN”.
After studying the album Professor Fell and Liz Green came to the conclusion that the unknown nurse was local because of the informal nature and content of some of the pictures.
Caroline Allwood was a ward sister at Eaton and later Oakfield from November 1914. She had a sister Nellie Haworth who was a nurse in London in 1911, when Caroline herself was living at Church House, Churton with her husband John, a farmer, and their son Frederick aged two.
There was nothing in the album to connect Caroline Allwood with ‘Self’ apart from a picture of a woman in a nurse’s uniform labelled simply ‘Nell’ thought to be her sister Nellie Haworth.

However Liz remembered among some loose pictures, one showing a house with a woman and child standing near the railings at the front. The words ‘Churton House Fred & Self’ were on the back of the photograph in her familiar handwriting.

When the photograph was enlarged the figures of Caroline Allwood and her smiling son Frederick Insull Allwood emerged from the grainy picture solving a mystery dating back almost 40 years.

Cabinet Member for Culture Leisure and Wellbeing Councillor Louise Gittins said: “The album is a poignant and evocative record of a time when the country stood together to face the horror of World War One.

“I would like to thank the experts whose hard work has solved a forty year old mystery and indeed the story of ‘Self’ has been told many times as a way of commemorating the First World War. Having a name to the picture has made the album even more notable.”