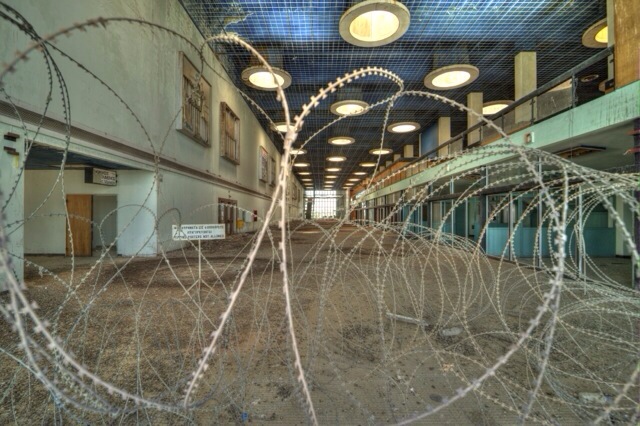 Chris Burton was granted access by Captain Tomas Ciampor, the UN Officer in charge of the no-man’s land and former war-zone that contains the airport, making him the 6th photographer to have set foot in the abandoned airport in 40 years.

The decision was made based on a viewing of Burton’s previous work at Chernobyl and other abandoned locales around the world, part of his on-going Urbex (Urban Exploration) projects.

Nicosia International Airport was originally the main airport for the island, but activity ceased following the Turkish invasion of Cyprus in 1974.

In June 1974 plans were in place for the terminal to be extended and the apron to be enlarged to 16 aircraft. This was never to happen: on 15 July 1974 Greek nationalists overthrew the democratically elected president of Cyprus and Nicosia Airport become a site of chaotic scenes as holidaymakers tried to leave the island.

Due to heavy bombing, the airport has remained closed ever since and now sits in the United Nations controlled no-man’s land between the North and South of the island. Currently the airport is a ghost town, looking exactly like it did the day the last flight left in July 1974, but now home to pigeons and 40 years of dirt and nature.

“I have become one of a few people lucky enough to witness this unusual, desolate location first hand, and wanted to create a set of photos that accurately represented what I witnessed”, says Chris.

“It was an scorching hot day (38°C) and was strange to experience an airport terminal without nice cool air conditioning, let alone without the crowds!”

“Having the full freedom of a large international airport was a bizarre experience, and one I’ll probably never repeat.”

To see more of Chris’ work at Nicosia click HERE