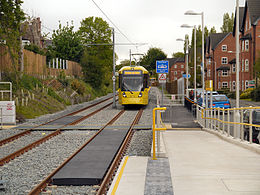 Police are appealing for witnesses after two men were attacked with a metal bar in two separate incidents in Didsbury Village one of which resulted in the man concerned having a heart attack.

A 23-year-old man was assaulted and threatened with a metal bar on the platform of Didsbury Village Metrolink Station by a man and two women.

Luckily the man did not suffer any serious injuries but was badly shaken by the incident, as he was kicked onto the tram line during the attack.

Minutes later a report was received that a 66-year-old man had been attacked and beaten over the head with a metal bar by a man and a woman as he walked home along Beaver Road in Didsbury.

The man was taken to hospital with head injuries and suffered a heart attack as a direct result the terrifying assault. He is now recovering at home thankfully.

The man was white and described as in his late teens, around 6ft tall, of slim build, and with wavy dark hair. He was wearing a grey hooded puffer jacket and dark bottoms and covered his face.

The women were both white, again in their late teens, both around 5ft5in tall and of slim build. One had very long blonde hair and was wearing dark clothing and a dark baseball cap. The other had dark hair tied back in a dark bun and was wearing a bright red jacket and dark bottoms.

Detective Constable Phil Whiting of GMP’s City of Manchester Team said: “These were both unprovoked and cowardly attacks which could have easily ended with the loss of life.

“One of the victims had a heart attack brought on by the assault. Luckily he’s now recovering at home but the effects of this are going to stay with him for the rest of his life.

“These are obviously dangerous individuals and I am appealing for anyone who recognises them or who may have witnessed the attacks to get in touch as soon as possible.

“I am determined to find them and bring them to justice.”

Man in court charged with murder of Shaun Murphy