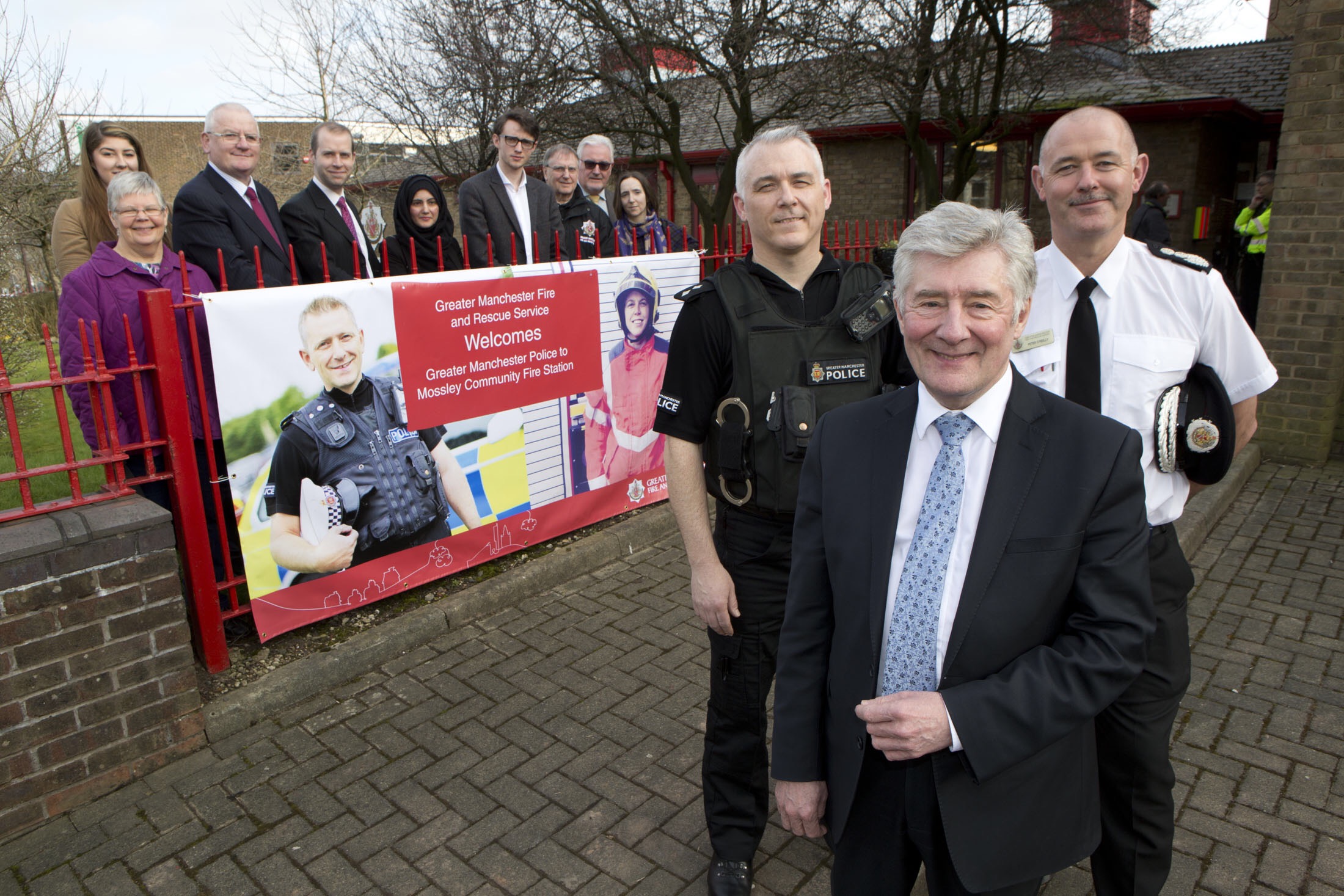 Neighbourhood officers are now co-located with fire officers at Mossley Fire Station, providing a more visible service to the community.
The move builds on successful co-location in other areas of Greater Manchester, including Irlam Fire Station in Salford where all three emergency services are located in one building, and Failsworth Town Hall which has been home to a police post since January 2015, bringing police and council services together in one place.

Welcoming the move, Greater Manchester Mayor and Police and Crime Commissioner Tony Lloyd said: “We’ve already seen the success of working side-by-side with the fire and rescue service in other areas of Greater Manchester so this move makes common sense, making neighbourhood officers more visible in the community.

“It’s an example of the strong partnership working we have in place in Mossley and across Tameside and Greater Manchester, bringing police and other agencies together to provide a stronger, more effective service to the public. This move is good news for the police, and for the people of Mossley.”

Jonathan Reynolds MP said: “By sharing a building, we are able to keep both Mossley police and Mossley fire services running from where they belong: in the heart of Mossley. The police and fire services are and in my view should always remain distinct operations, but sharing premises cuts costs, improves joint working and keeps uniformed officers right here in the community they serve.”

Councillor Kieran Quinn said: “I was always confident that, despite the cuts to police budgets, GMP would work hard to maintain police coverage in Mossley. This decision shows that confidence wasn’t misplaced, and it is re-assuring that the police will keep a base in the area. Moving in to the existing fire station is an ideal solution given its central location and the additional benefits co-locating the two services will bring. It will allow the police and fire services to work much more closely together and deliver arguably better and more responsive emergency services for the area.”

Inspector Kris Jura from Greater Manchester Police said: “This move helps us build upon our existing partnerships to provide an even more joined up approach to community engagement, something than can only benefit the people of Mossley.
“Mossley Station has been closed for the past few months so the selling of the building comes as no surprise at a time when the whole Force is looking to work more efficiently.”
Chair of Greater Manchester Fire and Rescue Authority, Councillor David Acton, said: “GMFRS is at the vanguard when it comes to co-locating blue light services and we’re delighted to welcome Greater Manchester Police to Mossley Community Fire Station.

“We want our fire stations to be right at the heart of the communities they serve. Welcoming Mossley’s neighbourhood policing team to our station saves public money and it will keep the people of Mossley safer.

“I’d like to wish the police officers working at the station a very warm welcome.”

The move is part of a package of measures to reinvigorate neighbourhood policing, which includes the rollout of body worn video and providing officers with mobile devices, which will let them do much of their work whilst on the beat instead of having to go back to the station.

Historical remains of medieval Ratcliffe to be investigated