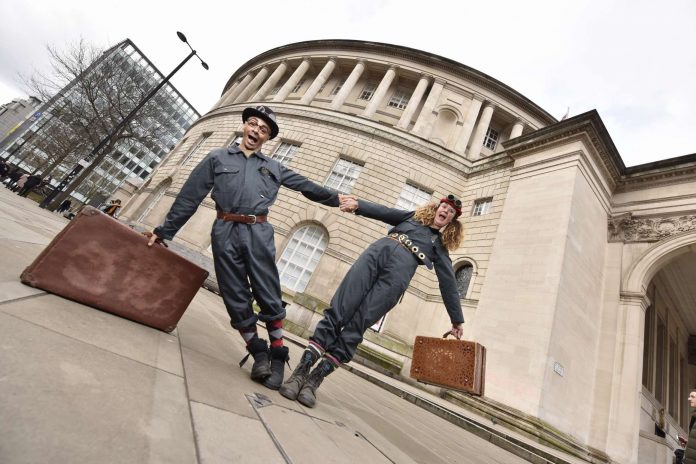 Get lost in the library! Insect-spotting, hide-and-seek, fancy dress, take-home crafts and eye-opening adventures between the bookshelves of Manchester’s Central Library are all on the fun-packed schedule of The Ministry of Lost & Found, a FREE family day out like no other on Sat 23 June 2018.

By arriving and grabbing a map, families will be introduced to the story of The Ministry of Lost & Found, established 123 years ago as one of the most secretive government agencies ever devised. In the company of the cheeky explorers, Leo Lost and Frankie Found, the library’s grand reading room becomes the perfect place for a game of hide-and-seek and an expedition in pursuit of some of the world’s best kept secrets.

Families are invited to “see and do, make and play, remember a picnic and stay for the day” as the two crazy characters, joined by their friends from The Ministry, turn the library into a playground for big ideas, laughter, being silly, being smart and getting busy.

Families can look forward to helping Mr Quaver to find his lost sounds in hidden instruments in the Henry Watson Music Room; learning circus skills with Fenella Von Hoop on a lost adventure around the library; and helping Mrs Pleat and Mrs Plait, from the Department of Found Wisdom, weave wise words into a giant piece of art in the Reading Room.

There’ll also be the opportunity to explore the Lost & Found office and all the strange and wonderful objects that Professor Maggie Artefact has found during her travels, and the chance to create new life forms and discover amazing microscopic creatures in Dr Shadow’s Lost Worlds Laboratory.

Parents are also invited to join-in and indulge in the, perhaps forgotten, pleasures of hula hooping and a treasure hunt. Being a library, story time sessions are also on the agenda, with everyone being encouraged to get lost in their own imaginations as well as in the historic building.

The Ministry of Lost & Found is commissioned by Library Live, Manchester Central Library’s cultural event programme, which continually pushes the boundaries of what a Library can be through creating unexpected, sociable and stimulating experiences through artistic and community collaboration. The Ministry of Lost & Found brings some of the city’s most committed and high-profile family arts organisations together as a Manchester Family Arts Network event, produced by Z-arts in partnership with Manchester Art Gallery and The Lowry.

In 2014, following a £50 million redevelopment, Central Library re-opened and as part of the celebrations, indie-rock band, Everything Everything, took residency and transformed the building through music. In October 2017, Manchester’s Company Chameleon devised and performed Illuminate, a sell-out run of specially-commissioned, after-hours dance performances inspired by literature and Central Library’s public spaces.

The Ministry of Lost & Found brings together some of Manchester’s most respected artists and performers, not least Stuart Bowden, playing Leo Lost, and Jana Kennedy in the role of Frankie Found. Combining the joy of hula-hooping with expressive performance, Rosalyn Norford will get people’s hips wiggling, while artists Tony Hall and Interference Art will set imaginations running wild with their creative arts and crafts activities. A specialist in opening young people’s eyes to a world of music, as well as releasing a series of acclaimed albums, Arun Ghosh brings melody to the day and professional storyteller Felicity Goodman will set hearts and minds racing by bringing thrilling tales to life.

Bringing all of these talents together is Jude Jagger, Creative Producer of The Ministry of Lost & Found, who says: “From music making to crafting, and circus skills to story-telling, The Ministry of Lost & Found promises to be a fabulously eccentric creative day, which is totally free. We’re looking forward to welcoming families from across Manchester and beyond and exploring Central Library in a way that’s never been done before.”

The Ministry of Lost & Found