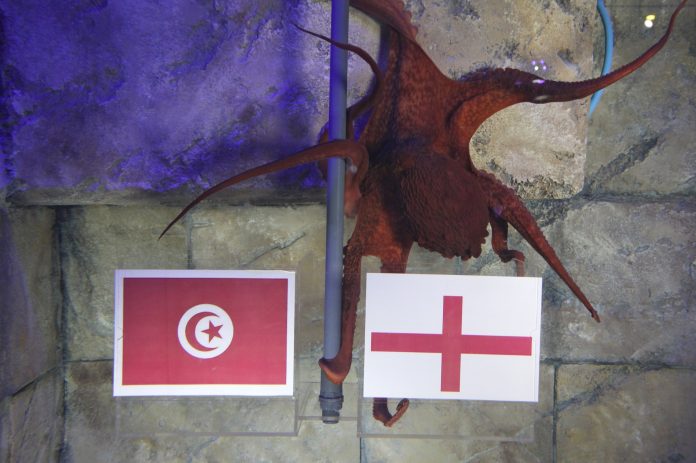 Manchester’s handiest football fan has arrived at Sea Life Manchester in the shape of a Giant Pacific Octopus. And the new arrival has already made waves by predicting the result of England’s first World Cup match against Tunisia on Monday 18th June, getting behind England and backing the team for a win!

Named ‘Einstein of the Ocean’ owing to her highly intelligent attributes, the unearthly creature of the deep, made her prediction in a process of selection, choosing which of two boxes, each containing one of the team’s flags, she wanted to squeeze into.

The unique and highly intelligent creatures can squeeze their entire bodies through the tiniest of spaces, due to octopi having no bones.

Speaking on the new arrival at the ever-popular Barton Square aquarium, Jenn McDonough, General Manger Manchester Cluster at Merlin Entertainments, said: “We’re over the moon to welcome Einstein to Sea Life Manchester, she is a fantastic addition and completes our new Lair of the Giant Crab feature, which also includes our two new Giant Japanese Spider Crabs.

“Manchester is famed for its world-class football teams and we’re confident Einstein will be just as skilled when it comes to predicting our World Cup match winners.

“Despite never setting a tentacle on the pitch, the aquarists here have complete faith in Einstein scoring a hat trick when she predicts England’s first round of group qualifying matches.  And they should know, they spend every day with Einstein and all our amazing 5,000 sea creatures, giving each individual creature the very best in expert care.”

The newest resident completes the recently launched ‘Lair of the Giant Crab’ feature that has seen a £400k investment at the popular Barton Square attraction.

Einstein occupies a specially built tank with treated glass, so that the tank remains dark for the young creature while visitors can view with ease her impressive span of 5ft, tentacle-to-tentacle.

More nuts and legumes, less red meat, and refined grains and you will live...