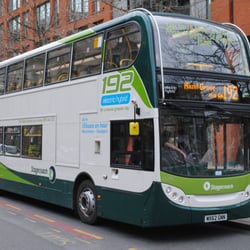 The first of the planned 105 new zero emissions double-decker buses and associated infrastructure is hoped to go live from summer 2019, delivering a massive boost to local air quality and UK manufacturing, with the new fleet fully in place by early 2020.

The plans are dependent on a bid for £21.5m in support from the Government’s recently announced Ultra-Low Emission Bus Scheme, which is aimed at cutting emissions and ensuring cleaner and greener journeys.

New Enviro400 EV City vehicles, each with a range of up to 190 miles and capacity to carry around 80 passengers, would be built by the UK’s leading electric bus manufacturer Alexander Dennis using battery and power electronics expertise from automotive company BYD.

Stagecoach is already the UK’s biggest investor in hybrid-electric bus technology and has invested more than £1billion in new greener buses over the past decade.

Transforming the air quality in Greater Manchester is one part of a wider multi-million-pound partnership blueprint developed by bus operators to deliver a step-change in the region’s bus network.

Martin Griffiths, Chief Executive of Stagecoach Group, said: “This game-changing initiative is the biggest single investment in e-bus technology anywhere in Europe. It is a clear sign of our bold ambition to transform Greater Manchester’s bus network”

“Our plans will put Greater Manchester at the forefront of the drive to improve local air quality, and help cement Britain’s position as global leader in manufacturing low-emission vehicles. It is also part of our wider partnership proposals to maximise the potential of the bus network to drive the region’s economy and better connect its communities.
“By working together, bus operators , the Mayor and the region’s local authorities can deliver the quick and sustained improvements we all want to see in Greater Manchester’s bus network, building on the major progress we’ve already made and avoiding unnecessary extra costs to local taxpayers.”

Stagecoach’s plans would see the new e-buses – which would replace conventional Euro 3 and Euro 4 vehicles – based at its depots in Hyde Road and Sharston.

Two further high frequency services would be operated predominantly by electric vehicles, supported by existing low carbon certified hybrid vehicles at peak times, meaning 36 buses per hour in each direction would be operated by the new e-bus fleet.

The introduction of new electric buses will also enable the cascade of existing low-carbon emissions vehicles onto two routes serving Trafford and Salford.

Around 15-20 buses would be introduced a month from summer 2019, with full roll out achieved by early 2020. Infrastructure works would begin in the autumn of 2018 and be fully completed by spring 2019.

The new e-bus fleet for Greater Manchester says the Company, offers a 62% improvement in CO2 emissions over the latest low-carbon emission buses and supports the region’s Air Quality Action Plan. Overall, the initiative would save 2.6 million litres of diesel a year, reduce annual CO2 by 6,800 tonnes , and cut NOx emissions by 24% and particulates by 20% across the fleet.

Parents of children with genetic conditions that cause learning disabilities are at risk of...

Crime on the up across Manchester